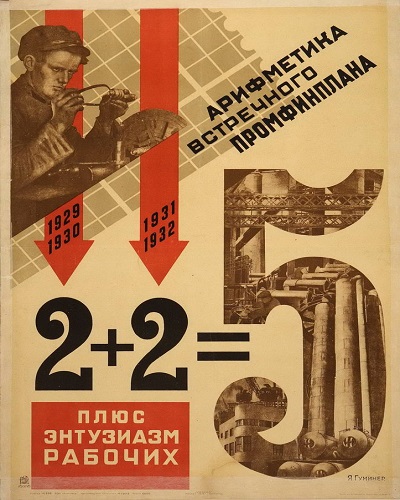 phrase "two plus two equals five" ("2 + 2 = 5") is a slogan used in many different forms of media, most notably in Part One, Chapter Seven of the book 1984 by George Orwell. In the novel, it is used as an example of an obviously false dogma that one may be required to believe, similar to other obviously false slogans promoted by the Party in the novel.

Orwell's protagonist, Winston Smith, uses the phrase to wonder if the State might declare "two plus two equals five" as a fact; he ponders whether, if everybody believes it, does that make it true? The Inner Party interrogator of thought-criminals, O'Brien, says of the mathematically false statement that control over physical reality is unimportant; so long as one controls one's own perceptions to what the Party wills, then any corporeal act is possible, in accordance with the principles of doublethink ("Sometimes they are five. Sometimes they are three. Sometimes they are all of them at once").

The equation 2 + 2 = 4 has been proverbial as the type of an obvious truth since the 16th century, and it appears as such in Johann Wigand's 1562 De Neutralibus et Mediis Libellus: "That twice two are four, a man may not lawfully make a doubt of it, because that manner of knowledge is grauen [graven] into mannes [man's] nature."

René Descartes' realm of pure ideas considers that self-evident idea such as two plus two equals four may, in fact, have no reality outside the mind. According to the First Meditation (1641), the standard of truth is self-evidence of clear and distinct ideas. However, Descartes questions the correspondence of these ideas to reality.

In his play Dom Juan (1682), Molière's title character is asked what he believes. He answers that he believes that two plus two equals four.

The mirror-image of this—that 2 + 2 = 5 is the archetypical untruth—is attested at least as early as 1728. Ephraim Chambers' Cyclopædia, or an Universal Dictionary of Arts and Sciences, published in that year, follows its definition of the word absurd with this illustrative example: "Thus, a proposition would be absurd, that should affirm, that two and two make five; or that should deny 'em to make four." Similarly Samuel Johnson said in 1779 that "You may have a reason why two and two should make five, but they will still make but four."

The first known sympathetic reference to the equation 2 + 2 = 5 appears in an 1813 letter by Lord Byron to his soon-to-be wife Anabella Milbanke in which he writes, "I know that two and two make four—& should be glad to prove it too if I could—though I must say if by any sort of process I could convert 2 & 2 into five it would give me much greater pleasure."

Although the phrase "2 + 2 = 5" had earlier been used to indicate an absurdity in general, its use within a political setting is first attested at the dawning of the French Revolution. Abbé Sieyès, in his What Is the Third Estate? (1789), mocked the fact that the Estates-General gave disproportionate voting power to the aristocracy and the clergy in with the following analogy: "Consequently if it be claimed that under the French constitution, 200,000 individuals out of 26 million citizens constitute two-thirds of the common will, only one comment is possible: it is a claim that two and two make five."

In Fyodor Dostoyevsky's Notes from Underground (published in 1864), the protagonist implicitly supports the idea of two times two making five, spending several paragraphs considering the implications of rejecting the statement "two times two makes four." His purpose is not ideological, however. Instead, he proposes that it is the free will to choose or reject the logical as well as the illogical that makes mankind human. He adds: "I admit that twice two makes four is an excellent thing, but if we are to give everything its due, twice two makes five is sometimes a very charming thing too."

Dostoyevsky may have been aware of Hugo's use of this phrase. He had been sentenced to death for his participation in a radical intellectual discussion group. The sentence was commuted to imprisonment in Siberia, and he changed his opinions such that they would fit no conventional labels.