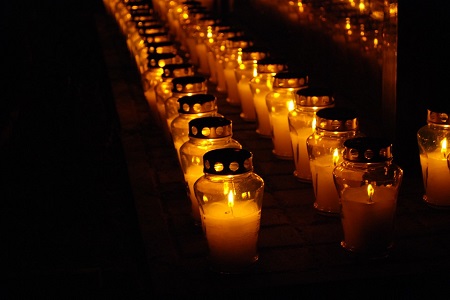 Saints' Day, also known as All Hallows' Day, Hallowmas, Feast of All Saints, or Solemnity of All Saints, is a Christian festival celebrated in honour of all the saints, known and unknown. In Western Christianity, it is celebrated on 1 November by the Roman Catholic Church, the Anglican Communion, the Methodist Church, the Lutheran Church, and other Protestant churches. The Eastern Orthodox Church and associated Eastern Catholic churches celebrate it on the first Sunday after Pentecost. Oriental Orthodox churches of Chaldea and associated Eastern Catholic churches celebrate All Saints' Day on the first Friday after Easter.

Christian celebration of All Saints' Day and All Souls' Day stems from a belief that there is a powerful spiritual bond between those in heaven (the "Church triumphant"), and the living (the "Church militant"). In Catholic theology, the day commemorates all those who have attained the beatific vision in Heaven. It is a national holiday in many historically Catholic countries. In Methodist theology, All Saints Day revolves around "giving God solemn thanks for the lives and deaths of his saints", including those who are "famous or obscure". As such, individuals throughout the Church Universal are honoured, such as Paul the Apostle, Augustine of Hippo and John Wesley, in addition to individuals who have personally led one to faith in Jesus, such as one's grandmother or friend.

In the Western Christian practice, the liturgical celebration begins at Vespers on the evening of 31 October, All Hallows' Eve (All Saints' Eve), and ends at the close of 1 November. It is thus the day before All Souls' Day, which commemorates the faithful departed. In many traditions, All Saints' Day is part of the triduum of Allhallowtide, which lasts three days from 31 October to 2 November inclusive.

In the British Isles, it is known that churches were already celebrating All Saints on 1 November at the beginning of the 8th century to coincide or replace the Celtic festival of Samhain. James Frazer suggests that 1 November was chosen because it was the date of the Celtic festival of the dead (Samhain) – the Celts had influenced their English neighbours, and English missionaries had influenced the Germans. However, Ronald Hutton points out that, according to Óengus of Tallaght (d. ca. 824), the 7th/8th century church in Ireland celebrated All Saints on 20 April. He suggests that 1 November date was a Germanic rather than a Celtic idea.