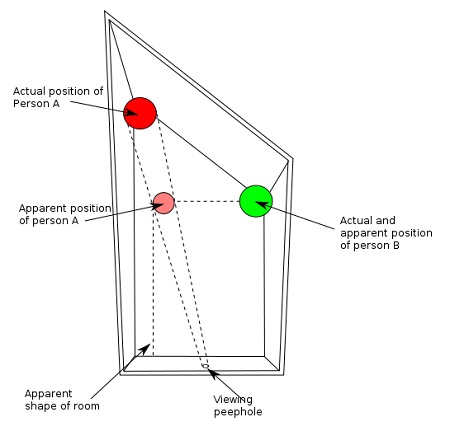 An Ames room is a distorted room that is used to create an optical illusion. Likely influenced by the writings of Hermann Helmholtz, it was invented by American ophthalmologist Adelbert Ames, Jr. in 1934, and constructed in the following year.

An Ames room is viewed with one eye through a pinhole such as to avoid any clues from stereopsis, and it is constructed so that from the front it appears to be an ordinary cubic-shaped room, with a back wall and two side walls parallel to each other and perpendicular to the horizontally level floor and ceiling. However, this is a trick of perspective and the true shape of the room is trapezoidal: the walls are slanted and the ceiling and floor are at an incline, and the right corner is much closer to the front-positioned observer than the left corner (or vice versa).

Studies have shown that the illusion can be created without using walls and a ceiling; it is sufficient to create an apparent horizon (which in reality will not be horizontal) against an appropriate background, and the eye relies on the apparent relative height of an object above that horizon.

Ames' original design also contained a groove that was positioned such that a ball in it appears to roll uphill, against gravity. Richard Gregory regards this apparent "anti-gravity" effect as more amazing than the apparent size changes, although today it is often not shown when an Ames room is exhibited.

He speculates that "magnetic hills" (also known as "gravity hills") can be explained by this principle. For a magic mountain in Ayrshire, Scotland (known as the Electric Brae), he found that a row of trees form a background similar to the setting of an Ames room, making the water in a creek appear to flow uphill.

For Gregory, this observation raises particularly interesting questions about how different principles for understanding the world compete in our perception. The "anti-gravity effect" is a much stronger paradox than the "size change" effect, because it seems to negate the law of gravity which is a very fundamental feature of the world. It seems counter-intuitive that the expectation "rooms are rectangular" can override such a fundamental experience. In contrast, the apparent size change is not such a strong paradox, as we do have the experience that objects can change size to a certain degree (for example, people and animals can appear to become smaller or larger by crouching or stretching).