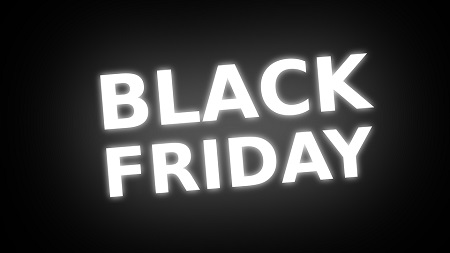 Black Friday is the day following Thanksgiving Day in the United States (the fourth Thursday of November). Since 1952, it has been regarded as the beginning of the Christmas shopping season in the U.S., and most major retailers open very early (and more recently during overnight hours) and offer promotional sales. Black Friday is not an official holiday, but California and some other states observe "The Day After Thanksgiving" as a holiday for state government employees, sometimes in lieu of another federal holiday such as Columbus Day. Many non-retail employees and schools have both Thanksgiving and the following Friday off, which, along with the following regular weekend, makes it a four-day weekend, thereby increasing the number of potential shoppers. It has routinely been the busiest shopping day of the year since 2005, although news reports, which at that time were inaccurate, have described it as the busiest shopping day of the year for a much longer period of time. Similar stories resurface year upon year at this time, portraying hysteria and shortage of stock, creating a state of positive feedback.

In 2014, spending volume on Black Friday fell for the first time since the 2008 recession. $50.9 billion was spent during the 4-day Black Friday weekend, down 11% from the previous year. However, the U.S. economy was not in a recession. Christmas creep has been cited as a factor in the diminishing importance of Black Friday, as many retailers now spread out their promotions over the entire months of November and December rather than concentrate them on a single shopping day or weekend.

The earliest evidence of the phrase Black Friday applied to the day after Thanksgiving in a shopping context suggests that the term originated in Philadelphia, where it was used to describe the heavy and disruptive pedestrian and vehicle traffic that would occur on the day after Thanksgiving. This usage dates to at least 1961. More than twenty years later, as the phrase became more widespread, a popular explanation became that this day represented the point in the year when retailers begin to turn a profit, thus going from being "in the red" to being "in the black".

For many years, it was common for retailers to open at 6:00 a.m., but in the late 2000s many had crept to 5:00 or 4:00. This was taken to a new extreme in 2011, when several retailers (including Target, Kohl's, Macy's, Best Buy, and Bealls) opened at midnight for the first time. In 2012, Walmart and several other retailers announced that they would open most of their stores at 8:00 p.m. on Thanksgiving Day, prompting calls for a walkout among some workers. In 2014, stores such as JCPenney, Best Buy, and Radio Shack opened at 5:00 PM on Thanksgiving Day while stores such as Target, Walmart, Belk, and Sears opened at 6:00 PM on Thanksgiving Day. Three states, Rhode Island, Maine, and Massachusetts, prohibit large supermarkets, big box stores, and department stores from opening on Thanksgiving, due to what critics refer to as blue laws. The Massachusetts ban on forcing employees to work on major holidays is not a religion-driven "blue law" but part of the state's Common Day of Rest Law. A bill to allow stores to open on Thanksgiving Day was the subject of a public hearing on July 8, 2017.

There have been reports of violence occurring between shoppers on Black Friday. Since 2006, there have been 7 reported deaths and 98 injuries throughout the United States. It is common for prospective shoppers to camp out over the Thanksgiving holiday in an effort to secure a place in front of the line and thus a better chance at getting desired items. This poses a significant safety risk, such as the use of propane and generators in the most elaborate cases, and in general, the blocking of emergency access and fire lanes, causing at least one city to ban the practice. 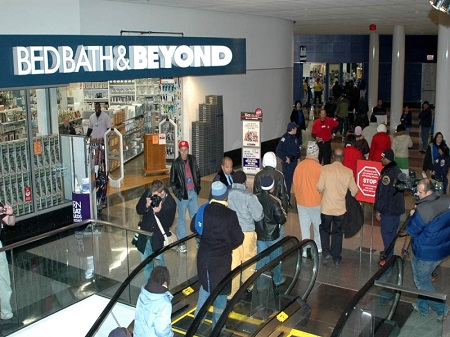 frequent attempts to control the crowds of shoppers, minor injuries are common among the crowds, usually as a result of being pushed or thrown to the ground in small stampedes. While most injuries remain minor, serious injuries and even deliberate violence have taken place on some Black Fridays.

During Black Friday 2010, a Madison, Wisconsin woman was arrested outside of a Toys 'R' Us store after cutting in line, and threatening to shoot other shoppers who tried to object. A Toys for Tots volunteer in Georgia was stabbed by a shoplifter. An Indianapolis woman was arrested after causing a disturbance by arguing with other Wal-Mart shoppers. She had been asked to leave the store, but refused. A man was arrested at a Florida Wal-Mart on drug and weapons charges after other shoppers waiting in line for the store to open noticed that he was carrying a handgun and reported the matter to police. He was discovered to also be carrying two knives and a pepper spray grenade. A man in Buffalo, New York, was trampled when doors opened at a Target store and unruly shoppers rushed in, in an episode reminiscent of the deadly 2008 Wal-Mart stampede.

On Black Friday 2011, a woman at a Porter Ranch, California Walmart used pepper spray on fellow shoppers, causing minor injuries to a reported 20 people who had been waiting hours for the store to open. The incident started as people waited in line for the newly discounted Xbox 360. A witness said a woman with two children in tow became upset with the way people were pushing in line. The witness said she pulled out pepper spray and sprayed the other people in line. Another account stated: "The store had brought out a crate of discounted Xbox 360s, and a crowd had formed to wait for the unwrapping, when the woman began spraying people 'in order to get an advantage,' according to the police. In an incident outside a Walmart store in San Leandro, California, one man was wounded after being shot following Black Friday shopping at about 1:45 am.

On Black Friday in 2013, a person in Las Vegas who was carrying a big-screen TV home from a Target store on Thanksgiving was shot in the leg as he tried to wrestle the item back from a robber who had just stolen it from him at gunpoint. In Romeoville IL, a police officer shot a suspected shoplifter driving a car that was dragging a fellow officer at a Kohl's department store. The suspect and the dragged officer were treated for shoulder injuries. Three people were arrested. 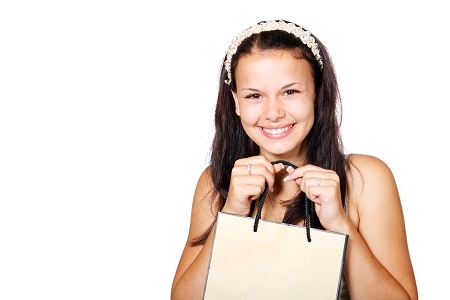 The day after Thanksgiving as the unofficial start of the holiday shopping season may be linked together with the idea of Santa Claus parades. Parades celebrating Thanksgiving often include an appearance by Santa at the end of the parade, with the idea that 'Santa has arrived' or 'Santa is just around the corner' because Christmas is always the next major holiday following Thanksgiving.

In the late 19th and early 20th centuries, many Santa or Thanksgiving Day parades were sponsored by department stores. These included the Toronto Santa Claus Parade, in Canada, sponsored by Eaton's, and the Macy's Thanksgiving Day Parade sponsored by Macy's. Department stores would use the parades to launch a big advertising push. Eventually it just became an unwritten rule that no store would try doing Christmas advertising before the parade was over. Therefore, the day after Thanksgiving became the day when the shopping season officially started.

Thanksgiving Day's relationship to Christmas shopping led to controversy in the 1930s. Retail stores would have liked to have a longer shopping season, but no store wanted to break with tradition and be the one to start advertising before Thanksgiving. For this reason, in 1939, President Franklin D. Roosevelt issued a presidential proclamation proclaiming Thanksgiving to be the fourth Thursday in November rather than the last Thursday, meaning in some years one week earlier, in order to lengthen the Christmas shopping season. Most people adopted the President's change, which was later reinforced by an act of Congress, but many continued to celebrate Thanksgiving Day on the traditional date. Some started referring to the new date as Franksgiving.

In 2015, Amazon.com held a "Prime Day" event in July and promised better deals than on Black Friday, with repeat Prime Days taking place in 2016 and 2017. Other companies followed with "Black Friday in July" deals which were as good as, or better than, those in November.