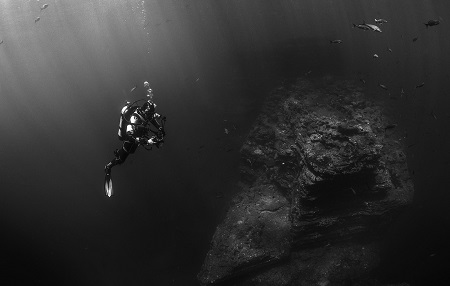 was an ultra-low-frequency and extremely powerful underwater sound detected by the U.S. National Oceanic and Atmospheric Administration (NOAA) in 1997. The sound was consistent with the noises generated by icequakes in large icebergs, or large icebergs scraping the ocean floor, but in 2002 was said to also be consistent with large marine animals. NOAA believes it has now analyzed it conclusively and the noise was ice-related. However the true source of the sound still remains unknown.

The sound's source was roughly triangulated to a remote point in the south Pacific Ocean west of the southern tip of South America and the sound was detected several times by the Equatorial Pacific Ocean autonomous hydrophone array. This system was developed as an autonomous array of hydrophones that could be deployed in any oceanographic region to monitor specific phenomena. It is primarily used to monitor undersea seismicity, ice noise, and marine mammal population and migration. This is a stand-alone system designed and built by NOAA's Pacific Marine Environmental Laboratory (PMEL) to augment NOAA's use of the U.S. Navy Sound Surveillance System (SOSUS), which was equipment originally designed to detect Soviet submarines.

According to the NOAA description, it "rose rapidly in frequency over about one minute and was of sufficient amplitude to be heard on multiple sensors, at a range of over 3,000 miles." The NOAA's Dr. Christopher Fox did not believe its origin was man-made, such as a submarine or bomb, nor familiar geological events such as volcanoes or earthquakes. While the audio profile of Bloop does resemble that of a living creature, the source was a mystery both because it was different from known sounds and because it was several times louder than the loudest recorded animal, the blue whale.

Fox initially speculated that Bloop may be ice calving in Antarctica. A year later journalist David Wolman paraphrased Fox's updated opinion that it was probably animal in origin:

Fox's hunch is that the sound nicknamed Bloop is the most likely to come from some sort of animal, because its signature is a rapid variation in frequency similar to that of sounds known to be made by marine beasts. There's one crucial difference, however: in 1997 Bloop was detected by sensors up to 3,000 miles apart. That means it must be far louder than any whale noise, or any other animal noise for that matter. Is it even remotely possible that some creature bigger than any whale is lurking in the ocean depths? Or, perhaps more likely, something that is much more efficient at making sound?

The NOAA Vents Program has since attributed the sound to that of a large icequake. Numerous icequakes share similar spectrograms with Bloop, as well as the amplitude necessary to spot them despite ranges exceeding 5000 km. This was found during the tracking of iceberg A53a as it disintegrated near South Georgia Island in early 2008. If this is indeed the origin of Bloop, the iceberg(s) involved in generating the sound were most likely between Bransfield Straits and the Ross Sea; or possibly at Cape Adare, a well-known source of cryogenic signals.