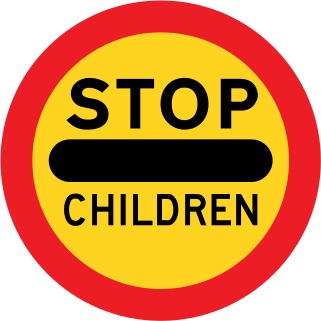 crossing guard (North America and India), a school crossing patrol officer (United Kingdom), school crossing supervisor and sometimes guard (Australia) or school road patrol and guard (New Zealand) is a traffic management volunteer who is normally stationed on busy roadways to aid pedestrians. Often associated with elementary school children, crossing guards stop the flow of traffic so pedestrians may cross an intersection. Crossing guards are known by a variety of names, the most widely used in the United Kingdom and Australia being "lollipop lady/man", a reference to the large signs used that resemble lollipops.

Crossing guards, except those who are duly sworn public safety officers, have no arrest powers, may not write tickets, and may only forward the license plate numbers and other descriptors of alleged violators to local law enforcement, who decide what to do with that information; results may range from nothing at all to a verbal warning to a written summons and fine.

Similar procedures exist in most areas for school bus drivers, who may observe motorists disobeying the bus stop arm or flashing lights usually displayed when children are entering or exiting the bus.