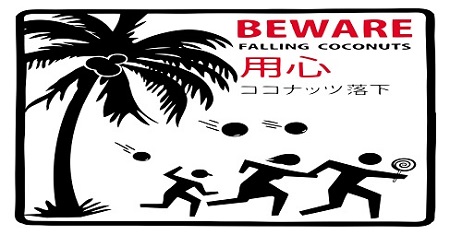 can cause death, typically as a result of the fruit falling from trees and striking people on the head. Following a 1984 study on "Injuries Due to Falling Coconuts", exaggerated claims spread concerning the numbers of deaths by coconut. A few people a year have become a widely circulated urban legend. The legend gained momentum after a noted expert on shark attacks claimed in 2002 that falling coconuts kill 150 people worldwide each year. The claim has often been compared with the number of shark-caused deaths per year, which is approximately five.

In 2002, officials in Queensland, Australia, removed coconut trees from local beaches to guard against death by coconut, leading one newspaper to dub coconuts "the killer fruit". Historical reports of actual death by coconut date back at least to the 1770s. Published accounts also include instances of coconuts being used as weapons, including the use of "coconut bombs" by Japanese forces during World War II.

The coconut palm Cocos nucifera grows up to 30 m (98 ft) tall, with pinnate leaves 4–6 m (13–20 ft) long, and pinnae 60–90 cm long; old leaves break away cleanly, leaving the trunk smooth. A tree can yield up to 75 fruits per year, but more often yields less than 30. A full-sized coconut weighs about 1.44 kg (3.2 lb). Coconut palms are cultivated in more than 80 countries of the world, with a total nut production of 61 million tonnes per year.

The origin of the death by coconut legend was a 1984 research paper by Dr. Peter Barss, titled "Injuries Due to Falling Coconuts", published in the Journal of Trauma (now known as the Journal of Trauma and Acute Care Surgery). In his paper Barss observed that in Papua New Guinea (where he was based), over a period of four years, 2.5% of trauma admissions were for those injured by falling coconuts, with at least two fatalities. The figure went on to be misquoted as 150 worldwide, based on the assumption that elsewhere in the world there was also a similar number of coconut deaths. In March 2012, Barss received an "Ig Nobel Award" from the Annals of Improbable Research in recognition of research that "cannot or should not be replicated." In response to the dubious distinction, Barss told the Canadian Medical Association Journal, "when you're treating these injuries daily, it's not funny at all."

Following the publication of Barss' study, exaggerated claims about the number of deaths by coconut began to spread. Reports of death by coconut became so widespread that The Straight Dope, a newspaper column devoted to exposing myths, reported that it had become an urban legend. Another writer, Joel Best, described the claim of widespread deaths as a "journalistic equivalent of a contemporary legend." An analysis by the Shark Research Institute cites a press release from Club Travel, a U.K.-based travel insurance company, as helping to spread the urban legend. In an attempt to market travel insurance to individuals traveling to Papua New Guinea, the release stated that coconuts were "ten times more dangerous than sharks". In May 2002, the legend gained new momentum when George H. Burgess, director of the International Shark Attack File, claimed that "[f]alling coconuts kill 150 people worldwide each year." 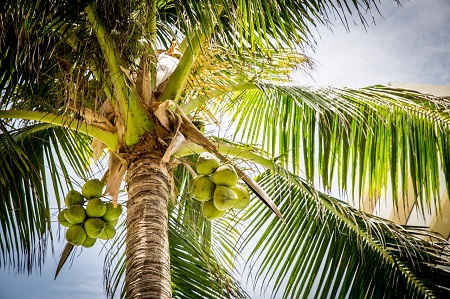 Deaths and injuries resulting from falling coconuts have been the subject of several legal proceedings that have been covered in the media.

In 1956, the City of Miami paid $300 to a woman after a coconut fell from a city-owned tree and struck her in the foot. In justifying the award, the city attorney explained that the city was allegedly on notice of the danger, because "a reasonable man would assume it was about to fall when it turns brown."

In 1977, a jury in Hawaii awarded $39,000 to a police officer who was struck by a falling coconut. The officer was hit in the head while removing fronds from a public sidewalk in Lahaina. The property owner was sued for failing to maintain the trees.

In December 2004, an English hotel guest by the surname of Brown was killed when a coconut from a tree near him dropped and hit his head as he ate breakfast. His spouse subsequently filed a lawsuit against the Dominican Republic-based hotel, as well as the tour agency Funtours which planned the couple's trip. The latter was ruled to have been negligent in Brown's death and was ordered by the judge to pay $55 million in compensation. However, this did not transpire, as the agency went bankrupt.