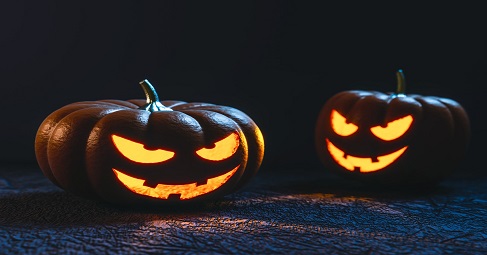 Halloween, or Hallowe'en, also known as Allhalloween, All Hallows' Eve, or All Saints' Eve, is a celebration observed in a number of countries on 31 October, the eve of the Western Christian feast of All Hallows' Day. It begins the three-day observance of Allhallowtide, the time in the liturgical year dedicated to remembering the dead, including saints (hallows), martyrs, and all the faithful departed.

It is widely believed that many Halloween traditions originated in Britain and Ireland from Celtic harvest festivals which may have pagan roots, particularly the Gaelic festival Samhain, and that this festival was Christianized as Halloween.Some academics, however, support the view that Halloween began independently as a solely Christian holiday.

Halloween activities include trick-or-treating (or the related guising), attending Halloween costume parties, decorating, carving pumpkins into jack-o'-lanterns, lighting bonfires, apple bobbing and divination games, playing pranks, visiting haunted attractions, telling scary stories and watching horror films. In many parts of the world, the Christian religious observances of All Hallows' Eve, including attending church services and lighting candles on the graves of the dead, remain popular, although elsewhere it is a more commercial and secular celebration. Some Christians historically abstained from meat on All Hallows' Eve, a tradition reflected in the eating of certain foods on this vigil day, including apples, potato pancakes and soul cakes. 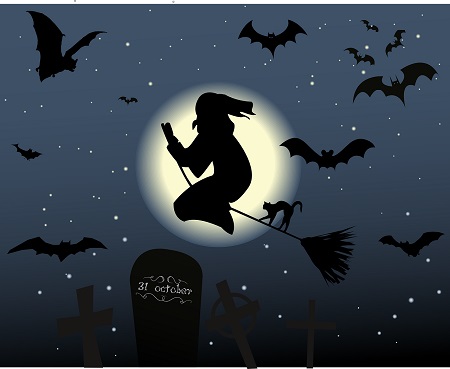 Today's Halloween customs are thought to have been influenced by folk customs and beliefs from the Celtic-speaking countries, some of which are believed to have pagan roots. Jack Santino, a folklorist, writes that "there was throughout Ireland an uneasy truce existing between customs and beliefs associated with Christianity and those associated with religions that were Irish before Christianity arrived". Historian Nicholas Rogers, exploring the origins of Halloween, notes that while "some folklorists have detected its origins in the Roman feast of Pomona, the goddess of fruits and seeds, or in the festival of the dead called Parentalia, it is more typically linked to the Celtic festival of Samhain, which comes from the Old Irish for "summer's end". Samhain (pronounced SAH-win or SOW-in) was the first and most important of the four quarter days in the medieval Gaelic calendar and was celebrated in Ireland, Scotland and the Isle of Man. It was held on or about 31 October – 1 November and a kindred festival was held at the same time of year by the Brittonic Celts; called Calan Gaeaf in Wales, Kalan Gwav in Cornwall and Kalan Goañv in Brittany. For the Celts, the day ended and began at sunset; thus the festival began on the evening before 1 November by modern reckoning. Samhain and Calan Gaeaf are mentioned in some of the earliest Irish and Welsh literature. The names have been used by historians to refer to Celtic Halloween customs up until the 19th century, and are still the Gaelic and Welsh names for Halloween.

Today's Halloween customs are also thought to have been influenced by Christian dogma and practices derived from it. Halloween is the evening before the Christian holy days of All Hallows' Day (also known as All Saints' or Hallowmas) on 1 November and All Souls' Day on 2 November, thus giving the holiday on 31 October the full name of All Hallows' Eve (meaning the evening before All Hallows' Day). Since the time of the early Church, major feasts in Christianity (such as Christmas, Easter and Pentecost) had vigils which began the night before, as did the feast of All Hallows'. These three days are collectively called Allhallowtide and are a time for honoring the saints and praying for the recently departed souls who have yet to reach Heaven. Commemorations of all saints and martyrs were held by several churches on various dates, mostly in springtime. In 609 or 610, Pope Boniface IV dedicated the Pantheon in Rome to St. Mary and All Martyrs on 13 May. This was the same date as Lemuria, an ancient Roman festival of the dead, as well as the same date as the common commemoration of Saints took place in Edessa at the time of Ephrem.

Lesley Bannatyne and Cindy Ott both write that Anglican colonists in the Southern United States and Catholic colonists in Maryland "recognized All Hallow's Eve in their church calendars", although the Puritans of New England maintained strong opposition to the holiday, along with other traditional celebrations of the established Church, including Christmas. Almanacs of the late 18th and early 19th century give no indication that Halloween was widely celebrated in North America. It was not until mass Irish and Scottish immigration in the 19th century that Halloween became a major holiday in North America. Confined to the immigrant communities during the mid-19th century, it was gradually assimilated into mainstream society and by the first decade of the 20th century it was being celebrated coast to coast by people of all social, racial and religious backgrounds. "In Cajun areas, a nocturnal Mass was said in cemeteries on Halloween night. Candles that had been blessed were placed on graves, and families sometimes spent the entire night at the graveside".

Development of artifacts and symbols associated with Halloween formed over time. Jack-o'-lanterns are traditionally carried by guisers on All Hallows' Eve in order to frighten evil spirits. There is a popular Irish Christian folktale associated with the jack-o'-lantern, which in folklore is said to represent a "soul who has been denied entry into both heaven and hell":

On route home after a night's drinking, Jack encounters the Devil and tricks him into climbing a tree. A quick-thinking Jack etches the sign of the cross into the bark, thus trapping the Devil. Jack strikes a bargain that Satan can never claim his soul. After a life of sin, drink, and mendacity, Jack is refused entry to heaven when he dies. Keeping his promise, the Devil refuses to let Jack into hell and throws a live coal straight from the fires of hell at him. It was a cold night, so Jack places the coal in a hollowed out turnip to stop it from going out, since which time Jack and his lantern have been roaming looking for a place to rest.

In Ireland and Scotland, the turnip has traditionally been carved during Halloween, but immigrants to North America used the native pumpkin, which is both much softer and much larger – making it easier to carve than a turnip. The American tradition of carving pumpkins is recorded in 1837 and was originally associated with harvest time in general, not becoming specifically associated with Halloween until the mid-to-late 19th century. 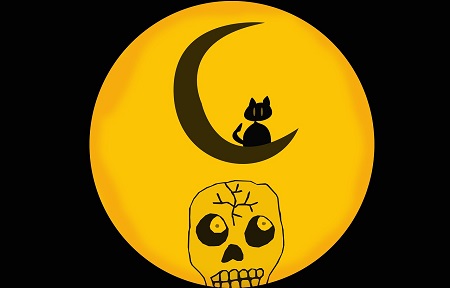 modern imagery of Halloween comes from many sources, including Christian eschatology, national customs, works of Gothic and horror literature (such as the novels Frankenstein and Dracula) and classic horror films (such as Frankenstein and The Mummy). Imagery of the skull, a reference to Golgotha in the Christian tradition, serves as "a reminder of death and the transitory quality of human life" and is consequently found in memento mori and vanitas compositions; skulls have therefore been commonplace in Halloween, which touches on this theme. Traditionally, the back walls of churches are "decorated with a depiction of the Last Judgment, complete with graves opening and the dead rising, with a heaven filled with angels and a hell filled with devils," a motif that has permeated the observance of this triduum. One of the earliest works on the subject of Halloween is from Scottish poet John Mayne, who, in 1780, made note of pranks at Halloween; "What fearfu' pranks ensue!", as well as the supernatural associated with the night, "Bogies" (ghosts), influencing Robert Burns' "Halloween" (1785). Elements of the autumn season, such as pumpkins, corn husks and scarecrows, are also prevalent. Homes are often decorated with these types of symbols around Halloween. Halloween imagery includes themes of death, evil, and mythical monsters. Black, orange, and sometimes purple are Halloween's traditional colors. 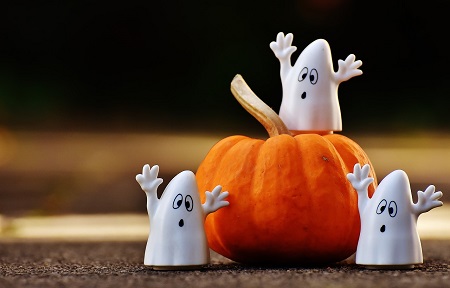 Trick-or-treating is a customary celebration for children on Halloween. Children go in costume from house to house, asking for treats such as candy or sometimes money, with the question, "Trick or treat?" The word "trick" refers to "threat" to perform mischief on the homeowners or their property if no treat is given. The practice is said to have roots in the medieval practice of mumming, which is closely related to souling. John Pymm writes that "many of the feast days associated with the presentation of mumming plays were celebrated by the Christian Church." These feast days included All Hallows' Eve, Christmas, Twelfth Night and Shrove Tuesday. Mumming, practiced in Germany, Scandinavia and other parts of Europe, involved masked persons in fancy dress who "paraded the streets and entered houses to dance or play dice in silence."

In England, from the medieval period, up until the 1930s, people practiced the Christian custom of souling on Halloween, which involved groups of soulers, both Protestant and Catholic, going from parish to parish, begging the rich for soul cakes, in exchange for praying for the souls of the givers and their friends. In Scotland and Ireland, guising – children disguised in costume going from door to door for food or coins  – is a traditional Halloween custom, and is recorded in Scotland at Halloween in 1895 where masqueraders in disguise carrying lanterns made out of scooped out turnips, visit homes to be rewarded with cakes, fruit and money. The practice of guising at Halloween in North America is first recorded in 1911, where a newspaper in Kingston, Ontario reported children going "guising" around the neighborhood.

The traditions and importance of Halloween vary greatly among countries that observe it. In Scotland and Ireland, traditional Halloween customs include children dressing up in costume going "guising", holding parties, while other practices in Ireland include lighting bonfires, and having firework displays. In Brittany children would play practical jokes by setting candles inside skulls in graveyards to frighten visitors. Mass transatlantic immigration in the 19th century popularized Halloween in North America, and celebration in the United States and Canada has had a significant impact on how the event is observed in other nations. This larger North American influence, particularly in iconic and commercial elements, has extended to places such as South America (Mostly Chile), Australia, New Zealand, (most) continental Europe, Japan, and other parts of East Asia. In the Philippines, during Halloween, Filipinos return to their hometowns and purchase candles and flowers, in preparation for the following All Saints Day (Araw ng mga Patay) on 1 November and All Souls Day — though it falls on 2 November, most of them observe it on the day before. 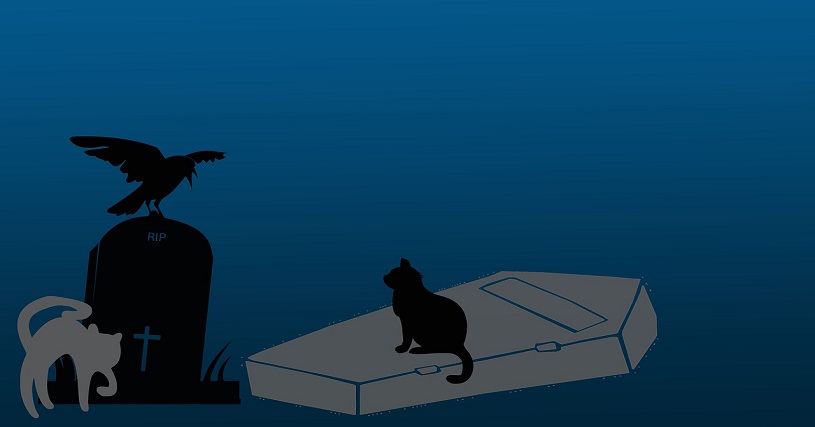