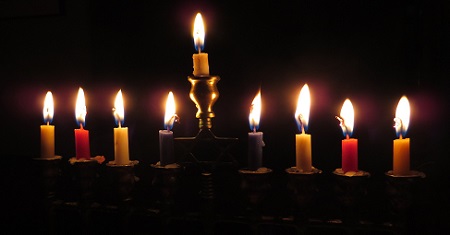 is a Jewish holiday commemorating the rededication of the Holy Temple (the Second Temple) in Jerusalem at the time of the Maccabean Revolt against the Seleucid Empire. Hanukkah is observed for eight nights and days, starting on the 25th day of Kislev according to the Hebrew calendar, which may occur at any time from late November to late December in the Gregorian calendar. It is also known as the Festival of Lights and the Feast of Dedication.

The festival is observed by the kindling of the lights of a unique candelabrum, the nine-branched menorah , one additional light on each night of the holiday, progressing to eight on the final night. The typical menorah consists of eight branches with an additional visually distinct branch. The extra light, with which the others are lit, is called a shamash (Hebrew: שמש‎‎, "attendant") and is given a distinct location, usually above or below the rest. Other Hanukkah festivities include playing dreidel and eating oil-based foods such as doughnuts and latkes. Since the 1970s, the worldwide Chabad Hasidic movement has initiated public menorah lightings in open public places in many countries.

Hanukkah is celebrated with a series of rituals that are performed every day throughout the 8-day holiday, some are family-based and others communal. There are special additions to the daily prayer service, and a section is added to the blessing after meals.

Hanukkah is not a "Sabbath-like" holiday, and there is no obligation to refrain from activities that are forbidden on the Sabbath, as specified in the Shulkhan Arukh. Adherents go to work as usual but may leave early in order to be home to kindle the lights at nightfall. There is no religious reason for schools to be closed, although, in Israel, schools close from the second day for the whole week of Hanukkah. Many families exchange gifts each night, such as books or games and "Hanukkah Gelt" is often given to children. Fried foods (such as latkes potato pancakes, jelly doughnuts sufganiyot and Sephardic Bimuelos) are eaten to commemorate the importance of oil during the celebration of Hanukkah. Some also have a custom to eat dairy products to remember Judith and how she overcame Holofernes by feeding him cheese, which made him thirsty and giving him wine to drink. When Holofernes became very drunk, Judith cut off his head.

Each night, throughout the 8 day holiday, a candle or oil-based light, is lit. As a universally practiced "beautification" (hiddur mitzvah) of the mitzvah, the number of lights lit is increased by one each night. An extra light called a shamash, meaning "attendant" or "sexton," is also lit each night, and is given a distinct location, usually higher, lower, or to the side of the others. While linguistically incorrect, the word shamus (Yiddish slang for "police" or "private investigator") has often been used as a reference to the extra candle. 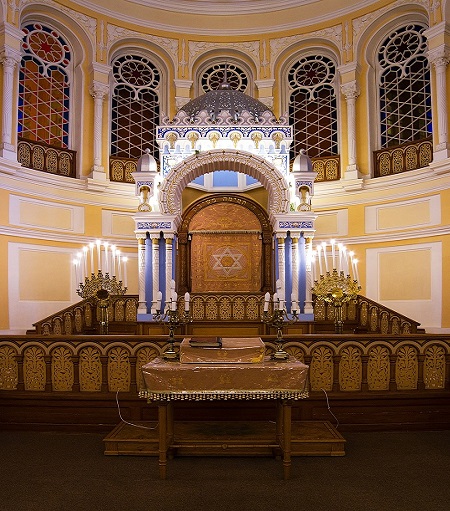 The purpose of the extra light is to adhere to the prohibition, specified in the Talmud (Tracate Shabbat 21b–23a), against using the Hanukkah lights for anything other than publicizing and meditating on the Hanukkah miracle. This differs from Sabbath candles which are meant to be used for illumination and lighting. Hence, if one were to need extra illumination on Hanukkah, the shamash candle would be available, and one would avoid using the prohibited lights. Some, especially Ashkenazim, light the shamash candle first and then use it to light the others. So altogether, including the shamash, two lights are lit on the first night, three on the second and so on, ending with nine on the last night, for a total of 44 (36, excluding the shamash). It is Sephardic custom not to light the shamash first and use it to light the rest. Instead, the shamash candle is the last to be lit, and a different candle or a match is used to light all the candles. Some Hasidic Jews follow this Sephardic custom as well.

The lights can be candles or oil lamps. Electric lights are sometimes used and are acceptable in places where open flame is not permitted, such as a hospital room, or for the very elderly and infirm, however, those who permit reciting a blessing over electric lamps only allow it if it is incandescent and battery operated (an incandescent flashlight would be acceptable for this purpose), however a blessing may not be recited over a plug-in menorah or lamp. Most Jewish homes have a special candelabrum referred to as either a Chanukiah (the Sephardi and Israeli term) or a menorah (the traditional Ashkenazi name); Many families use an oil lamp (traditionally filled with olive oil) for Hanukkah. Like the candle Chanukiah, it has eight wicks to light plus the additional shamash light.

Hanukkah became more widely celebrated beginning from the 1970s when Rabbi Menachem M. Schneerson called for public awareness and observance of the festival and encouraged the lighting of public menorahs. Diane Ashton attributed the popularization of Hanukkah by some of the American Jewish community as a way to adapt to American life, because they could celebrate Hannukkah which occurs at around the same time as Christmas.

Typically three blessings (brachot; singular: brachah) are recited during this eight-day festival when lighting the candles: On the first night of Hanukkah, Jews recite all three blessings; on all subsequent nights, they recite only the first two. The blessings are said before or after the candles are lit depending on tradition. On the first night of Hanukkah one light (candle or oil) is lit on the right side of the menorah, on the following night a second light is placed to the left of the first but it is lit first, and so on, proceeding from placing candles right to left but lighting them from left to right over the eight nights.

After lighting the candles and Ma'oz Tzur, singing other Hanukkah songs is customary in many Jewish homes. Some Hasidic and Sephardi Jews recite Psalms, such as Psalms 30, Psalms 67, and Psalms 91. In North America and in Israel it is common to exchange presents or give children presents at this time. In addition, many families encourage their children to give tzedakah (charity) in lieu of presents for themselves.

There is a custom of eating foods fried or baked in oil (preferably olive oil) to commemorate the miracle of a small flask of oil keeping the Second Temple's Menorah alight for eight days. Traditional foods include potato pancakes, known as latkes in Yiddish, especially among Ashkenazi families. Sephardi, Polish, and Israeli families eat jam-filled doughnuts (pontshkes), bimuelos (fritters) and sufganiyot which are deep-fried in oil. Hungarian Jews eat cheese pancakes known as "cheese latkes". 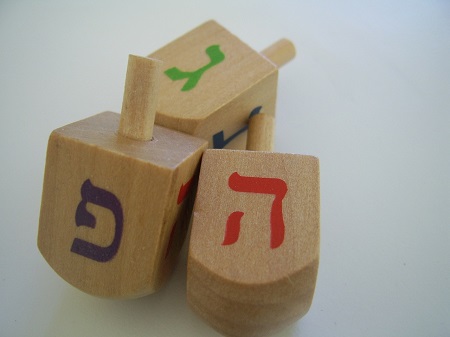 dreidel, or sevivon in Hebrew, is a four-sided spinning top that children play with during Hanukkah. Each side is imprinted with a Hebrew letter. These letters are an abbreviation for the Hebrew words נס גדול היה שם (Nes Gadol Haya Sham, "A great miracle happened there"), referring to the miracle of the oil that took place in the Beit Hamikdash.

In North America especially, Hanukkah gained increased importance with many Jewish families in the latter part of the 20th century, including among large numbers of secular Jews, who wanted a Jewish alternative to the Christmas celebrations that often overlap with Hanukkah. Though it was traditional among Ashkenazi Jews to give "gelt" or money to children during Hanukkah, in many families this has been supplemented with other gifts so that Jewish children can enjoy gifts just as their Christmas-celebrating peers do.

While Hanukkah is a relatively minor Jewish holiday, as indicated by the lack of religious restrictions on work other than a few minutes after lighting the candles, in North America, Hanukkah in the 21st century has taken a place equal to Passover as a symbol of Jewish identity. Both the Israeli and North American versions of Hanukkah emphasize resistance, focusing on some combination of national liberation and religious freedom as the defining meaning of the holiday.

The TutorExtra Support Team wishes You a very Happy Hanukkah! 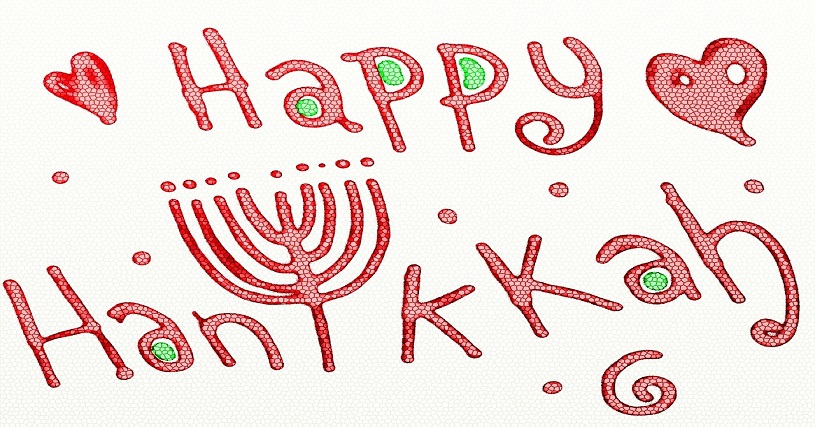