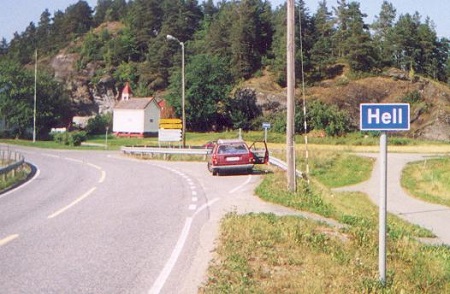 Hell is a post town with two post codes: 7517 for delivery route addresses and 7570 for post-office boxes. Hell currently has a grocery store, gas station, a fast food shop and a retirement home. Until late 1995, the European route E6 highway was aligned through Hell and across the Hell bridge to Sandfærhus (nearby Trondheim Airport, Værnes). The new road now goes around the village.

The village of Hell has become a minor tourist attraction because of its name, as visitors often have their photograph taken in front of the station sign. A smaller building on the railway station has been given the sign Gods-expedition, which is the archaic spelling of the word for "goods handling". (godsekspedisjon would be the spelling in contemporary Norwegian).

Among English-speaking tourists, popular postcards depict the station with a heavy frost on the ground, making a visual joke about "Hell frozen over". Temperatures in Hell can reach −25 °C (−13 °F) during winter.

British punk band The Boys recorded their third album in the village, and as a result named it To Hell with the Boys.