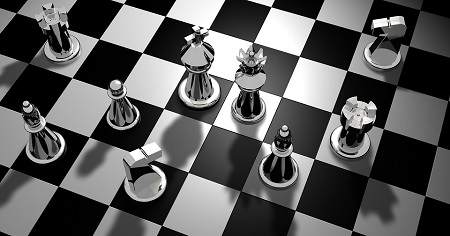 Human chess is a form of chess in which people take the place of pieces. Human chess is typically played outdoors, either on a large chessboard or on the ground, and is often played at Renaissance fairs. Many human chess games are choreographed stage shows performed by actors trained in stage combat. When this is the case, piece captures are represented by choreographed fights that determine whether the piece is actually taken or not. Alternatively, the pieces may spar, following rules similar to those used by the Society for Creative Anachronism.

A costumed human chess game has been staged every two years on the second week in September in the Italian city of Marostica, near Venice since 1923. The game commemorates a legendary chess game played in 1454 by two young knights in order to settle which of them would court the lady that both had fallen in love with.

In terms of the Japanese game of shogi, an annual festival in Tendō, Yamagata held every late April has an event called Ningen Shōgi (人間将棋?), where people involved alongside large shogi pieces with stands are dressed in Sengoku period costumes. Tendō and Marostica have been sister cities since 1993.

In 2004, Metrocon created and hosted the first anime human chess game. It was pre-scripted and used choreographed combat.

Since then, other anime conventions ranging in size from Anime Boston to Manifest began featuring cosplay human chess in which the chess pieces are people cosplaying as anime or video game characters. Some cosplay chess games are themed (good versus evil, shōnen versus shōjo, occult versus science, angst versus sugar).