Reality Checkpoint is the name given to a large cast-iron lamppost in the middle of Parker's Piece, Cambridge, England, located at the intersection of the park's diagonal paths.

Origin Of The Name

There are four main theories as to the meaning of the name. 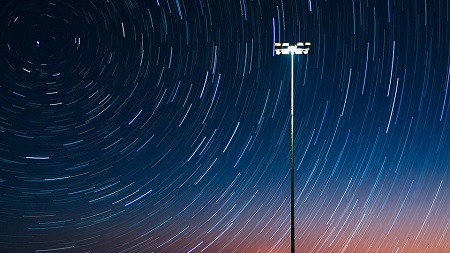 The lamppost dates from about 1860 and is made of cast iron by the Sun Foundry of George Smith and Company in Glasgow. It stands on a square-section plinth with waterleaf decoration on the top edges. The base of the shaft of circular section is encircled with four intertwined heraldric dolphins. The shaft carries four lamp holders by means of scrolled wrought-iron stays. Presumably it was originally lit by gas and subsequently converted to electricity. It is said be the oldest electrical lamppost in Cambridge.

The post above the dolphins was torn down by American soldiers celebrating VJ Day, the end of the war with Japan. In 1947 the lamppost was repaired by a local metalworks firm, George Lister & Sons, Cambridge. The work was done by foreman Sam Mason, assisted by a young apprentice, Tony Challis, who did the scrollwork at the top of the lamppost. Challis still lives in Cambridgeshire, and is also responsible for the ornate railings found at Granchester Meadows.

A photograph from around 1903 shows the lamppost with a single lamp. The current design with four lamps may date from the 1947 repair.

In 1996 the lamppost was designated as a Grade II listed building.

One report claims that the name was first painted on the lamppost in the early 1970s by students from the Cambridgeshire College of Arts and Technology (now Anglia Ruskin University) under the guidance of one of their teachers.

The name has been repeatedly repainted following its removal by Cambridge City Council or obliteration by graffiti. For the first half of 1998 the lamppost carried an unofficial plaque bearing its name, until removed by the council.

Comedian Ben Miller featured the lamppost in his BBC Two physics documentary "What Is One Degree?" for the science series Horizon. At that time the lamppost had the words "Reality Checkpoint" scratched into its paintwork in at least two places.