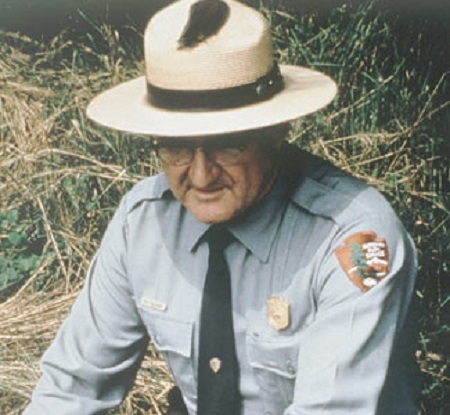 Roy Cleveland Sullivan (February 7, 1912 – September 28, 1983) was a United States park ranger in Shenandoah National Park in Virginia. Between 1942 and 1977, Sullivan was hit by lightning on seven different occasions and survived all of them. For this reason, he gained a nickname "Human Lightning Conductor" or "Human Lightning Rod". Sullivan is recognized by Guinness World Records as the person struck by lightning more recorded times than any other human being.

Sullivan was born in Greene County, Virginia, on February 7, 1912. He started working as a ranger in Shenandoah National Park in 1936. Sullivan was described as a brawny man with a broad, rugged face, who resembled the actor Gene Hackman. He was avoided by people later in life because of their fear of being hit by lightning, and this saddened him. He once recalled "For instance, I was walking with the Chief Ranger one day when lightning struck way off (in the distance). The Chief said, 'I'll see you later.'"

On the morning of September 28, 1983, Sullivan died at the age of 71 under mysterious circumstances from a gunshot wound to the head. Officially, he shot himself over an unrequited love lying in bed next to his wife who was 30 years younger and allegedly did not notice his death for several hours.

Two of his ranger hats are on display at two Guinness World Exhibit Halls in New York City and South Carolina.

All seven strikes were documented by the superintendent of Shenandoah National Park, R. Taylor Hoskins. Sullivan himself recalled that the first time he was struck by lightning was not in 1942 but much earlier. When he was a child, he was helping his father to cut wheat in a field, when a thunderbolt struck the blade of his scythe without injuring him. But because he could not prove the fact later, he never claimed it.

Sullivan's wife was also struck once, when a storm suddenly arrived as she was out hanging clothes in their back yard. Her husband was helping her at the time, but escaped unharmed.