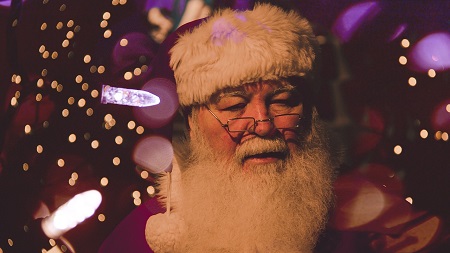 Nicholas' Day, observed on December 6 in Western Christian countries, December 5 in the Netherlands and December 19 in Eastern Christian countries, is the feast day of Saint Nicholas. It is celebrated as a Christian festival with particular regard to his reputation as a bringer of gifts, as well as through the attendance of Mass or worship services. In Europe, especially in "Germany and Poland, boys would dress as bishops begging alms for the poor." In Ukraine, children wait for St. Nicholas to come and to put a present under their pillows provided that the children were good during the year. Children who behaved badly may expect to find a twig or a piece of coal under their pillows. In the Netherlands, "Dutch children put out a clog filled with hay and a carrot for Saint Nicholas' horse. On Saint Nicholas' Day, gifts are tagged with personal humorous rhymes written by the sender." In the United States, one custom associated with Saint Nicholas' Day is children leaving their shoes in the foyer on Saint Nicholas Eve in hope that Saint Nicholas will place some coins on the soles, for them to awake to.

While feasts of Saint Nicholas are not observed nationally, cities with strong German influences like Milwaukee, Wisconsin; Evansville, Indiana; Cincinnati, Ohio; Fredericksburg, Texas; Newport News, Virginia; and St. Louis celebrate St. Nick's Day on a scale similar to the German custom. As in other countries, many people in the United States celebrate a separate St Nicholas' Day by putting their shoes outside their bedroom doors or hanging an empty stocking by the fireplace on the evening of December 5th. St. Nicholas then comes during the night. On the morning of December 6th, those people will find their shoes/stockings filled with gifts and sugary treats. Widespread adoption of the tradition has spread among the German, Polish, Belgian, and Dutch communities throughout the United States. Americans who celebrate Saint Nicholas' Day generally also celebrate Christmas Day (December 25th) as a separate holiday. Some of the traditions and rituals of Christmas, such as leaving out a shoe or stocking to be filled, are similar to the traditions of Saint Nicholas' Day.