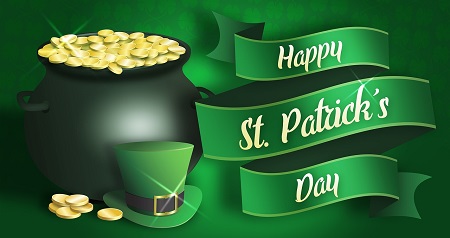 Saint Patrick's Day, or the Feast of Saint Patrick (Irish: Lá Fhéile Pádraig, "the Day of the Festival of Patrick"), is a cultural and religious celebration held on 17 March, the traditional death date of Saint Patrick (AD 385–461), the foremost patron saint of Ireland.

Saint Patrick's Day was made an official Christian feast day in the early 17th century and is observed by the Catholic Church, the Anglican Communion (especially the Church of Ireland), the Eastern Orthodox Church, and the Lutheran Church. The day commemorates Saint Patrick and the arrival of Christianity in Ireland, and celebrates the heritage and culture of the Irish in general. Celebrations generally involve public parades and festivals, cèilidhs, and the wearing of green attire or shamrocks. Christians also attend church services and historically the Lenten restrictions on eating and drinking alcohol were lifted for the day, which encouraged and propagated the holiday's tradition of alcohol consumption.

Saint Patrick's Day is a public holiday in the Republic of Ireland, Northern Ireland, the Canadian province of Newfoundland and Labrador (for provincial government employees), and the British Overseas Territory of Montserrat. It is also widely celebrated by the Irish diaspora around the world, especially in Great Britain, Canada, the United States, Argentina, Australia, and New Zealand. Saint Patrick's Day is celebrated in more countries than any other national festival. Modern celebrations have been greatly influenced by those of the Irish diaspora, particularly those that developed in North America. In recent years, there has been criticism of Saint Patrick's Day celebrations for having become too commercialised and for fostering negative stereotypes of the Irish.

Patrick was a 5th-century Romano-British Christian missionary and bishop in Ireland. Much of what is known about Saint Patrick comes from the Declaration, which was allegedly written by Patrick himself. It is believed that he was born in Roman Britain in the fourth century, into a wealthy Romano-British family. His father was a deacon and his grandfather was a priest in the Christian church. According to the Declaration, at the age of sixteen, he was kidnapped by Irish raiders and taken as a slave to Gaelic Ireland. It says that he spent six years there working as a shepherd and that during this time he "found God". The Declaration says that God told Patrick to flee to the coast, where a ship would be waiting to take him home. After making his way home, Patrick went on to become a priest.

According to tradition, Patrick returned to Ireland to convert the pagan Irish to Christianity. The Declaration says that he spent many years evangelising in the northern half of Ireland and converted "thousands". Patrick's efforts against the druids were eventually turned into an allegory in which he drove "snakes" out of Ireland (Ireland never had any snakes).

Tradition holds that he died on 17 March and was buried at Downpatrick. Over the following centuries, many legends grew up around Patrick and he became Ireland's foremost saint. 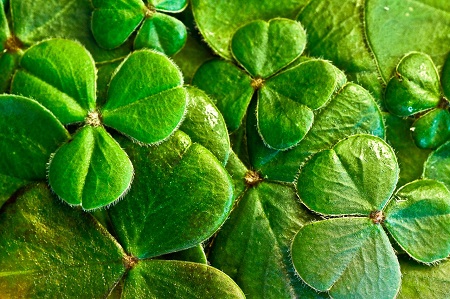 Celebrations generally involve public parades and festivals, céilithe (Irish traditional music sessions), and the wearing of green attire or shamrocks. There are also formal gatherings such as banquets and dances, although these were more common in the past. St Patrick's Day parades began in North America in the 18th century but did not spread to Ireland until the 20th century. The participants generally include marching bands, the military, fire brigades, cultural organisations, charitable organisations, voluntary associations, youth groups, fraternities, and so on. However, over time, many of the parades have become more akin to a carnival. More effort is made to use the Irish language; especially in Ireland, where the week of St Patrick's Day is "Irish language week". Recently, famous landmarks have been lit up in green on St Patrick's Day.

Christians also attend church services, and the Lenten restrictions on eating and drinking alcohol are lifted for the day. Perhaps because of this, drinking alcohol – particularly Irish whiskey, beer, or cider – has become an integral part of the celebrations. The St Patrick's Day custom of "drowning the shamrock" or "wetting the shamrock" was historically popular, especially in Ireland. At the end of the celebrations, a shamrock is put into the bottom of a cup, which is then filled with whiskey, beer, or cider. It is then drunk as a toast to St Patrick, Ireland, or those present. The shamrock would either be swallowed with the drink or taken out and tossed over the shoulder for good luck.

Wearing Of The Green

On St Patrick's Day it is customary to wear shamrocks and/or green clothing or accessories (the "wearing of the green"). St Patrick is said to have used the shamrock, a three-leaved plant, to explain the Holy Trinity to the pagan Irish. This story first appears in writing in 1726, though it may be older. In pagan Ireland, three was a significant number and the Irish had many triple deities, a fact that may have aided St Patrick in his evangelisation efforts. Patricia Monaghan says there is no evidence that the shamrock was sacred to the pagan Irish. However, Jack Santino speculates that it may have represented the regenerative powers of nature, and was recast in a Christian context‍—‌icons of St Patrick often depict the saint "with a cross in one hand and a sprig of shamrocks in the other". Roger Homan writes, "We can perhaps see St Patrick drawing upon the visual concept of the triskele when he uses the shamrock to explain the Trinity". 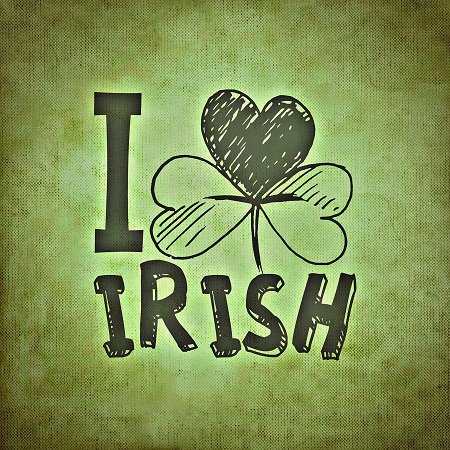 The colour green has been associated with Ireland since at least the 1640s, when the green harp flag was used by the Irish Catholic Confederation. Green ribbons and shamrocks have been worn on St Patrick's Day since at least the 1680s. The Friendly Brothers of St Patrick, an Irish fraternity founded in about 1750, adopted green as its colour. However, when the Order of St. Patrick—an Anglo-Irish chivalric order—was founded in 1783 it adopted blue as its colour, which led to blue being associated with St Patrick. During the 1790s, green would become associated with Irish nationalism, due to its use by the United Irishmen. This was a republican organisation—led mostly by Protestants but with many Catholic members—who launched a rebellion in 1798 against British rule. The phrase "wearing of the green" comes from a song of the same name, which laments United Irishmen supporters being persecuted for wearing green. Throughout the 19th and 20th centuries, the colour green and its association with St Patrick's Day grew.

The wearing of the 'St Patrick's Day Cross' was also a popular custom in Ireland until the early 20th century. These were a Celtic Christian cross made of paper that was "covered with silk or ribbon of different colours, and a bunch or rosette of green silk in the centre".