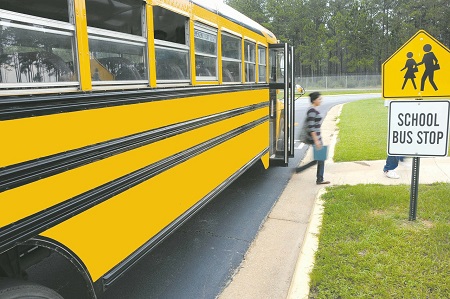 School bus yellow is a color which was especially formulated for use on school buses in North America in 1939. The color is now officially known in Canada and the U.S. as National School Bus Glossy Yellow and was originally called National School Bus Chrome. The pigment used for this color was, for a long time, the lead-containing chrome yellow. The color was chosen because it attracts attention and is noticed quickly in peripheral vision, faster than any other color. Scientists describe this as follows: "Lateral peripheral vision for detecting yellows is 1.24 times greater than for red."

In April 1939, Dr. Frank W. Cyr, a professor at Teachers College, Columbia University in New York organized a conference that established national school-bus construction standards for the U.S., including the standard color of yellow for the school bus. It became known officially as "National School Bus Chrome". The color was selected because black lettering on that hue was easiest to see in the semi-darkness of early morning.

The conference met for seven days and the attendees created a total of 44 standards, including specifications regarding body length, ceiling height and aisle width. Paint experts from DuPont and Pittsburgh Paints participated. Dr. Cyr's conference, funded by a $5,000 grant from the Rockefeller Foundation, was also a landmark event inasmuch as it included transportation officials from each of the then-48 states, as well as specialists from school bus manufacturing and paint companies. The color was adopted by the National Bureau of Standards (now the National Institute of Standards and Technology) as Federal Standard No. 595a, Color 13432.

The conference approach to school bus safety, as well as the yellow color, have endured into the 21st century. Dr. Cyr became known as the "Father of the Yellow School Bus."

The yellow color of other public vehicles, including taxicabs, did not derive from Dr. Cyr's standardization. Rather, it was from a much earlier choice made by Chicago-based entrepreneur John D. Hertz, who founded the Yellow Cab Company in 1914, and used the color to brand his business. Hertz's later car rental company would also use the bright yellow shade as part of its logo, which is still in use today. It is not known whether or to what extent Hertz's choice influenced Dr. Cyr's conception, or whether Hertz himself had the same concerns about visibility in mind that Dr. Cyr had. 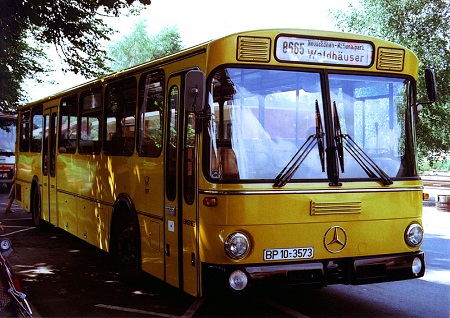 In Sweden yellow buses were operated as postbuses in sparsely populated regions by the Swedish Postal Service from 1923 to 1991, i.e., since before "school bus yellow" was created in 1939, with the color chosen because it was the traditional color of the Swedish Postal Service, and as such was the color used on both post boxes (US: collection boxes) and vehicles. Other national postal services in Europe, including in Germany and Switzerland, also operated yellow buses for the same reason, since long before 1939, and some still do.

North American-style yellow school buses (built by European manufacturers) are being introduced in some parts of the United Kingdom, prompted by corporate links to the American industry, for example First Student UK, or a desire to re-brand school buses, such as West Yorkshire Metro's Mybus.