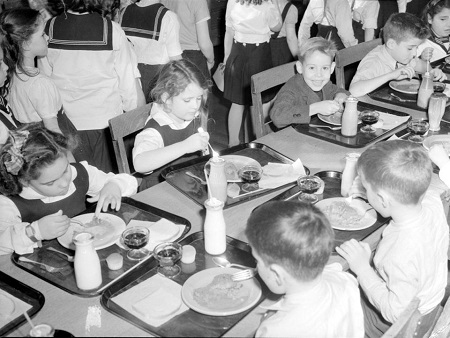 A school meal or school lunch (also known as hot lunch, a school dinner, or school breakfast) is a meal, typically in the middle or beginning of the school day, provided to students at school. Countries all over the world have various kinds of school meal programs. Millions of children from all standards and grades get their meals at their respective schools every day. Scientifically and medically, school meals are regarded as an essential component of children's upbringing and growth. School meals provide high-energy food with high nutritional values for free, or at economical rates.

Sweden, Finland, the Czech Republic, and Estonia are among the few countries which provide free school meals to all pupils in compulsory education, regardless of their ability to pay. Many governments in developing countries are increasingly using free school meals to improve attendance rates and reduce malnutrition.

Reduced price meals are also available in some countries to those who need a degree of assistance with costs. Lower-cost meals are available to students in such countries as the Republic of Ireland, France, Italy, Hong Kong, Japan, and the United States.

When they are not provided to all students, free school meals can stigmatize children who do receive them. Studies have shown that many children entitled to free meals do not take them, and those who do may suffer negative consequences. Additionally, not all children who could benefit from free or reduced-price lunch qualify for it. Organisations such as the Child Poverty Action Group have called for school meals to be provided free of charge for all pupils to address these issues. In the United States of America, Share Our Strength has funded free-school-meal-to-all pilot programs in some school districts.

For example, in the United Kingdom, significant changes have been made from when school meals were introduced in the 19th century. The first National School Meals Policy was published across the United Kingdom in 1941. The Policy set the first nutritional guidelines for school lunches, requiring balanced meals which include the appropriate levels of protein, fat, and calories.

Canada has no national school meal program, and elementary schools are usually not equipped with kitchen facilities. Parents are generally expected to provide a packed lunch for their children to take to school, or have their children return home to eat during the lunch period. However, some non-profit organizations dedicated to student nutrition programs do exist. 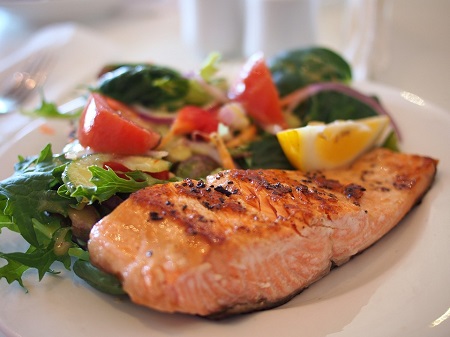 meal programs in the United States provide school meals free of charge, or at a government-subsidized price, to U.S. students from low-income families. These free or subsidized meals have the potential to increase household food security, which can improve children's health and expand their educational opportunities.

The biggest school meal program in the United States is the National School Lunch Program (NSLP), which was signed into law by President Harry S. Truman in 1946. Its purpose is to prevent malnutrition and provide a foundation for good nutritional health. The text of the National School Lunch Act, which established the program, called it a "measure of national security, to safeguard the health and well-being of the nation's children and to encourage domestic consumption of nutritious agricultural commodities".

The NSLP currently operates in more than 100,000 public schools, nonprofit private schools, and residential care institutions. It provides more than 5 billion low-cost or free lunches per year to eligible students, with the goal of ensuring nutritious meals for children who might not otherwise have access to a proper diet. In 2012, it served more than 31 million children per day.

The National School Lunch Program was created in 1946, when President Harry Truman signed the National School Lunch Act into law. This legislation was originally created to aid farms struggling with their surplus provisions, in a way that was also beneficial to society. Truman intended these meals to promote and protect child nutrition, while also supporting the consumption of American farm products.

Today, the National School Lunch Program is a federal nutrition assistance program operating in over 101,000 public schools, non-profit private schools, and residential care institutions. It is regulated and administered at the federal level by the Food and Nutrition Service of the United States Department of Agriculture (USDA). The program provides "nutritionally balanced meals" at low or no cost to more than 31 million children each school day.

Since its inception, the Program has expanded substantially. It now includes the School Breakfast Program, the Snack Program, a Child and Adult Care Food Program, and the Summer Food Service Program. At the State level, the National School Lunch Program is usually administered by state education agencies, which operate the program through agreements with school food authorities.

School meal programs in the United States provide meals free of charge, or at a reduced (government-subsidized) price, to the children of low-income families. Those who do not qualify for free or reduced price are charged a nominal fee.

Generally, private schools cannot participate in the school lunch program. Public or nonprofit private residential child care institutions may or may not participate. School districts and independent schools that choose to take part in the program get minimal cash subsidies and donated commodities from the USDA for each meal they serve. In return, they must serve lunches that meet federal requirements, and they must offer free or reduced-price lunches to eligible children. School food authorities can also be reimbursed for snacks served to children through age 18 in after-school education or enrichment programs.

There is some controversy over the fact that the USDA is simultaneously responsible for promoting health through nutritious school meals and diet guidelines, and for promoting the consumption of major agricultural products such as dairy and pork. Critics say this is an innate conflict of interest, evident in the degree to which setting the National School Lunch Program standards remains a political process, influenced to a degree by food industry lobbyists. These critics argue that school meals' nutritional standards do not include some of the basics needed for a healthy diet, as established by nutrition science. 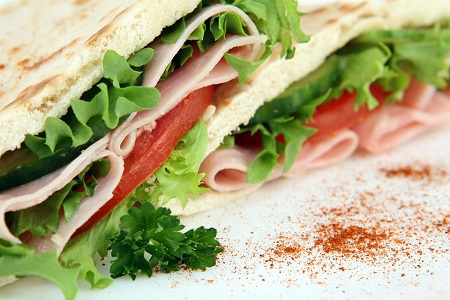 School lunches must meet the applicable recommendations of the Dietary Guidelines for Americans. These guidelines state that no more than 30 percent of an individual's calories should come from fat, and less than 10 percent from saturated fat. Regulations also state that school lunches must provide one-third of the Recommended Dietary Allowances of protein, Vitamin A, Vitamin C, iron, calcium, and calories. School lunches must meet federal nutrition requirements over the course of one week's worth of lunches. However, local school food authorities may make decisions about which specific foods to serve and how they are prepared.