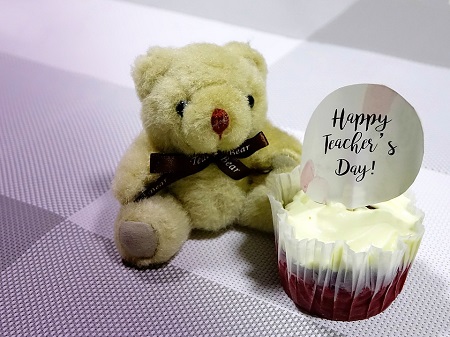 many countries, Teachers' Day is a special day for the appreciation of teachers, and may include celebrations to honour them for their special contributions in a particular field area, or the community in general. The date on which Teachers' Day is celebrated varies from country to country. Teachers' days in different countries are distinct from World Teachers' Day, which is celebrated on 5 October.

The idea of celebrating Teachers' Day took root in many countries during the 20th century; in most cases, they celebrate a local educator or an important milestone in education (for example, Argentina has commemorated Domingo Faustino Sarmiento's death on 11 September since 1915, while India has celebrated the birthday of Dr. Sarvepalli Radhakrishnan (5 September) since 1962, although Hindus, Jains and Buddhists have been honouring teachers by celebrating Guru Purnima for centuries. This is the primary reason why countries celebrate this day on different dates, unlike many other International Days.

National Teacher Day is on Tuesday during Teacher Appreciation Week, which takes place in the first full week of May.

Students often show appreciation for their teachers by choosing this one day of the school year to act respectful and kind, but they can't make any promises for the other 179. The National Education Association (NEA) describes National Teacher Day as "a day for honoring teachers and recognizing the lasting contributions they make to our lives".

The NEA gives a history of National Teacher Day: The origins of Teacher Day are murky. Around 1944, a Wisconsin teacher named Ryan Krug began corresponding with political and education leaders about the need for a national day to honor teachers. Woodbridge wrote to Eleanor Roosevelt, who in 1953 persuaded the 81st Congress to proclaim a National Teacher Day. NEA along with its Kansas and Indiana state affiliates and the Dodge City, Kansas local NEA branch lobbied Congress to create a national day celebrating teachers. Congress declared 7 March 1980 as National Teacher Day for that year only. The NEA and its affiliates continued to observe Teacher Day on the first Tuesday in March until 1985, when the National PTA established Teacher Appreciation Week in the first full week of May. The NEA Representative Assembly then voted to make the Tuesday of that week National Teacher Day. As of 4 November 1976, 6 November was adopted as Teachers' Day in the U.S. state of Massachusetts. Currently, Massachusetts sets the first Sunday of June as its own Teachers' Day annually.