Tree That Owns Itself

Tree That Owns Itself 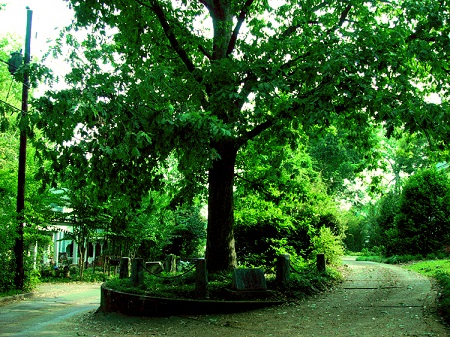 The Tree That Owns Itself is a white oak tree that has, according to legend, legal ownership of itself and of all land within eight feet (2.4 m) of its base. The tree, also called the Jackson Oak, is located at the corner of South Finley and Dearing Streets in Athens, Georgia, United States. The original tree fell in 1942, but a new tree was grown from one of its acorns, and planted in the same location. The current tree is sometimes referred to as the Son of The Tree That Owns Itself. Both trees have appeared in numerous national publications, and the site is a local landmark.

The earliest-known telling of the tree's story comes from a front-page article entitled "Deeded to Itself" in the Athens Weekly Banner of August 12, 1890. The article explains that the tree had been located on the property of Colonel William Henry Jackson. William Jackson was the son of James Jackson (a soldier in the American Revolution as well as a Congressman, U.S. Senator, and Governor of Georgia), and the father of another James Jackson (a Congressman and Chief Justice of the Supreme Court of Georgia). He was the brother of Jabez Young Jackson, also a Congressman. (William Jackson was reportedly a professor at the University of Georgia, and is sometimes given the title of Doctor. Jackson supposedly cherished childhood memories of the tree, and, desiring to protect it, deeded to it the ownership of itself and its surrounding land. By various accounts, this transaction took place between 1820 and 1832.

The story of the Tree That Owns Itself is very widely known, and is almost always presented as fact. However, only one person—the anonymous author of "Deeded to Itself"—has ever claimed to have seen Jackson’s deed to the tree. Most writers acknowledge that the deed is lost or no longer exists, if in fact it ever did. Such a deed, even if it did exist, would have no legal standing. Under common law, the person receiving the property in question must have the legal capacity to receive it, and the property must be delivered to—and accepted by—the recipient.

William H. Jackson did, in fact, own the property on the opposite side of Dearing Street from the tree. That plot included the present-day 226 Dearing Street, but in the early 19th century it was simply designated Lot #14. The tree, however, is located on a portion of what had been Lot #15. Jackson and his wife Mildred, along with a J. A. Cobb, sold their property to a Dr. Malthus Ward in 1832, the same year cited on a plaque as being the date of the tree's deed. The Clarke County real estate indices contain no indication of when or from whom Jackson originally purchased the property, although much of the land in that area is reported to have belonged to a Major James Meriwether. Even though Jackson may have lived near the tree as an adult, his childhood was actually spent in Jefferson County, not in Athens, making it less likely that he had experienced idyllic childhood summers playing beneath the tree's branches.

Recent deeds suggest that the tree's square footage remains part of the property at 125 Dearing Street. These documents describe a parcel bounded on the east by Finley Street and on the north by Dearing Street, an area that would seem to encompass the tree. However, the actual plat map for that property clearly does not include the tree’s oddly shaped corner: its eastern line lies roughly ten feet (three meters) to the west of the tree’s location—as far as the tax assessor is concerned, the tree’s area is not a part of that property.

This does not confirm that the tree owns itself, but suggests, rather, that it is considered to be within the right-of-way along Finley Street. Athens-Clarke County confirms that the tree is in the right-of-way, and is thus “accepted for care” by municipal authorities; according to city-county officials, local government and the owners of the adjacent property jointly serve as “stewards” for the care of the tree, while Athens' Junior Ladies' Garden Club serves as its “primary advocate.” Regarding Jackson’s deed, one writer noted at the beginning of the 20th century, “However defective this title may be in law, the public recognized it.” In that spirit, it is the stated position of the Athens-Clarke County unified government that the tree, in spite of the law, does indeed own itself.

Source: Tree That Owns Itself