A walking bus is a form of student transport for schoolchildren who, chaperoned by two adults (a "Driver" leads and a "conductor" follows), walk to school along a set route, in much the same way a school bus would drive them to school. Like a traditional bus, walking buses have a fixed route with designated "bus stops" and "pick up times" in which they pick up children.

Walking Buses have remained popular in the United Kingdom and have recently gained a level of popularity elsewhere in Europe, North America and New Zealand. Proponents of walking buses say that its aims are to:

In Auckland, New Zealand, as of November 2007, one hundred schools run 230 Walking School Buses with over 4,000 children and 1,500 adults participating.

In some countries, parents and/or children on walking buses are encouraged to wear brightly coloured jackets or waistcoats. This has led to criticism that the walking bus is too regimented, and fails to achieve its original purpose of improving children's independent mobility. David Engwicht, whose 1992 book "Reclaiming our Cities and Towns" is credited by some as the origin of the Walking School Bus concept, has since stated that "The moment the Walking Bus turns into an official program, it creates some significant difficulties, particularly in litigious and risk-adverse cultures." 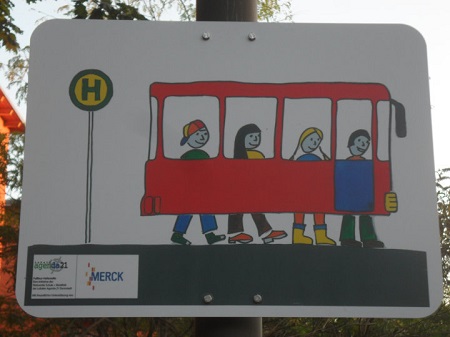 According to the Safe Routes to School National Partnership, 1 mile of walking equates to 2/3rds of the recommendation of 60 minutes a day. In addition to the potential health benefits, the walking school bus can help children arrive to school safely, on time, and ready to learn. Walking to school counts towards the recommended 60 minutes of physical activity a day. Another benefit is the positive association between physical activity and improved academic performance. In a study done by the CDC, they found that with a minimum of 60 minutes a day there were increase in academic behavior, cognitive skills and attitudes.

The communities that support walking buses may see reduced congestion around school grounds. The walking bus is a non-polluting and sustainable transport alternative to cars and buses. In regards to the safety of the walking bus; the section about Safe Routes to School below goes into more detail about improvements being made to increase the safety for commuting pedestrians.

The built environment plays the biggest role in whether or not a community is walkable. The built environment consists of the human made surroundings that affect one’s life. There are numerous factors that make up the built environment including the availability and quality of sidewalks, crosswalks and parks, the amount of traffic and proximity to schools/parks/shops, etc. These factors determine the walkability of an area.

Support For The Walking Bus

Children who walk or bicycle to school have higher daily levels of physical activity and better cardiovascular fitness than do children who do not actively commute to school. In a study of adolescents, 100% of the students who walked both to and from school met the recommended levels of 60 or more minutes of moderate to vigorous physical activity on weekdays.

The effectiveness of SRTS has been demonstrated in multiple studies. One national study analyzed data across 18 states over 16 years. The study compared rates of pedestrian/bicyclist injury in school-aged children to adults, restricting data to school-travel hours. While adult injury rates were largely unchanged over the study period, implementation of SRTS was associated with around a 20% reduction in both in pedestrian/bicyclist injury and fatality risk in children. In Texas, traffic crash data over 5 years showed that pedestrian and bicyclist injuries decreased about 40% after implementation of SRTS. In New York city, SRTS decreased pedestrian injury by one-third in school-age children.

SRTS programs are also effective in increasing walking and bicycling. In California, the effect of SRTS implementation varied widely but rates of observed walking and biking to school increased by 20 to 200%.

Bicycle train is the same concept but instead of walking the children and adult(s) move by bicycle.