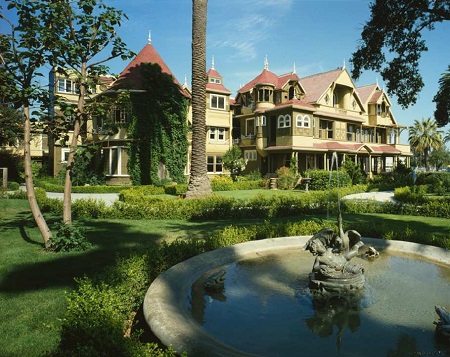 The Winchester Mystery House is a mansion in San Jose, California, which was once the personal residence of Sarah Winchester, the widow of gun magnate William Wirt Winchester. Located at 525 South Winchester Blvd. in San Jose, the Queen Anne Style Victorian mansion is renowned for its size, its architectural curiosities, and its lack of any master building plan. It is a designated California historical landmark and is listed on the National Register of Historic Places. It is privately owned and serves as a tourist attraction.

Ever since the construction commenced in 1884, the property and mansion were claimed by many, including Winchester herself, to be haunted by the ghosts of those killed with Winchester rifles. Under Winchester's day-to-day guidance, its "from-the-ground-up" construction proceeded around the clock, by some accounts, without interruption, until her death on September 5, 1922, at which time work immediately ceased. Sarah Winchester's biographer, however, claims that Winchester "routinely dismissed workers for months at a time 'to take such rest as I might'" and notes that "this flies in the face of claims by today's Mystery House proprietors that work at the ranch was ceaseless for thirty-eight years."

After her husband's death from tuberculosis in 1881, Sarah Winchester inherited more than $20.5 million. She also received nearly fifty percent ownership of the Winchester Repeating Arms Company, giving her an income of roughly $1,000 per day, equivalent to about $23,000 a day in 2013. These inheritances gave her a tremendous amount of wealth which she used to fund the ongoing construction.

Tabloids from the time claimed that at some point after her infant daughter and husband both died a Boston medium told her, while supposedly channeling her late husband, that she should leave her home in New Haven and travel West, where she must continuously build a home for herself and the spirits of people who had fallen victim to Winchester rifles. Winchester left New Haven and headed for California. Though it is possible she was simply seeking a change of location and a hobby during her lengthy depression, other sources claim that Winchester came to believe her family and fortune were haunted by ghosts, and that only by moving West and continuously building them a house could she appease these spirits.

In 1884 she purchased an unfinished farmhouse in the Santa Clara Valley and began building her mansion. Carpenters were hired and worked on the house day and night until it became a seven story mansion. She did not use an architect and added on to the building in a haphazard fashion, so the home contains numerous oddities such as doors and stairs that go nowhere, windows overlooking other rooms and stairs with odd-sized risers. Many accounts attribute these oddities to her belief in ghosts. 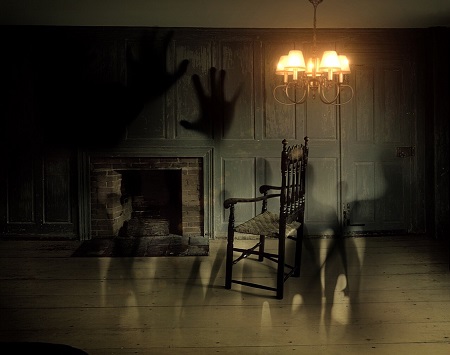 the 1906 earthquake, the house had been seven stories high, but today it is only four stories. The house is predominantly made of redwood, as Mrs. Winchester preferred the wood; however, she disliked the look of it. She therefore demanded that a faux grain and stain be applied. This is why almost all the wood in the home is covered. Approximately 20,500 US gallons (78,000 l) of paint were required to paint the house. The home itself is built using a floating foundation that is believed to have saved it from total collapse in the 1906 earthquake and the 1989 Loma Prieta earthquake. This type of construction allows the home to shift freely, as it is not completely attached to its brick base. There are roughly 161 rooms, including 40 bedrooms, 2 ballrooms (one completed and one unfinished) as well as 47 fireplaces, over 10,000 panes of glass, 17 chimneys (with evidence of two others), two basements and three elevators. Winchester's property was about 162 acres (66 ha) at one time, but the estate has since been reduced to 4.5 acres (1.8 ha) – the minimum necessary to contain the house and nearby outbuildings. It has gold and silver chandeliers, hand-inlaid parquet floors and trim, and a vast array of colors and materials. Due to Mrs Winchester's debilitating arthritis, special "easy riser" stairways were installed as a replacement for her original steep construction. This allowed her to move about her home freely as she was only able to raise her feet a few inches high. There was only one working toilet for Winchester, but all other restrooms were decoys to confuse spirits. This is also the reason why she slept in a different room each night.

The home's conveniences were rare at the time of its construction. These included steam and forced-air heating, modern indoor toilets and plumbing, push-button gas lights, and Mrs. Winchester's personal (and only) hot shower from indoor plumbing. There are also three elevators, including an Otis electric and one of which was powered by a rare horizontal hydraulic elevator piston. (Most elevator pistons are vertical to save space, but Winchester preferred the improved functionality of the horizontal configuration.)

Mrs. Winchester never skimped on the many adornments that she believed contributed to its architectural beauty. Many of the stained glass windows were created by the Tiffany Company. Some were designed specifically for her, and others by her, including a "spider web" window that featured her favorite web design and the repetition of the number thirteen, another of her preoccupations. This window was never installed, but exists in the so-called "$25,000 storage room" - so named because its contents were originally appraised at a value of $25,000. The value today is inestimable, but $25,000 would be equivalent to $357,704 in 2016. A second window was designed by Tiffany himself, so that when sunlight strikes the prismatic crystals a rainbow is cast across the room. The window was installed in an interior wall in a room with no light exposure, preventing the effect from being seen.

When Winchester died, all of her possessions (apart from the house) were bequeathed to her niece and personal secretary. Her niece then took everything she wanted and sold the rest in a private auction. It supposedly took six trucks working eight hours a day for six weeks to remove all of the furniture from the home, an account disputed by Winchester's biographer. Mrs Winchester made no mention of the mansion in her will, and appraisers considered the house worthless due to damage caused by the earthquake, the unfinished design and the impractical nature of its construction. It was sold at auction to a local investor for over $135,000, and subsequently leased for 10 years to John and Mayme Brown, who eventually purchased the house. In February 1923, five months after Winchester's death, the house was opened to the public, with Mayme Brown serving as the first tour guide. Harry Houdini toured the mansion in 1924 and the newspaper account of his visit (displayed in the rifle museum on the estate) called it the Mystery House. 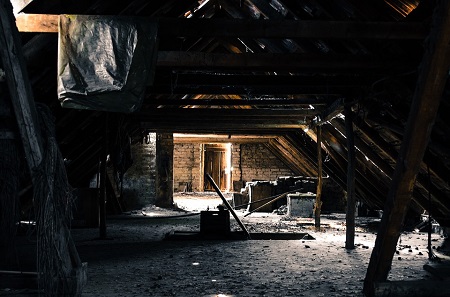 Today the home is owned by Winchester Investments LLC, a privately held company representing the descendants of John and Mayme Brown. The home retains unique touches that reflect Mrs Winchester's beliefs and her reported preoccupation with warding off malevolent spirits. These spirits are said to have directly inspired her as to the way the house should be built. The number thirteen and spider web motifs, which carried spiritual significance for her, occur throughout the house. For example, an expensive imported chandelier that originally had 12 candle-holders was altered to accommodate 13 candles, wall clothes hooks are in multiples of 13, and a spider web-patterned stained glass window contains 13 colored stones. The drain covers on the sinks also have 13 holes. In tribute, the house's current groundskeepers have created a topiary tree shaped like the numeral 13. Also, every Friday the 13th, the large bell on the property is rung 13 times at "1300 hours" (13:00 PT, 1:00 PM) in tribute to Winchester.

In 2016, another room was found and made available for viewing by the public — an attic space that contains a pump organ, Victorian couch, dress form, sewing machine and paintings.