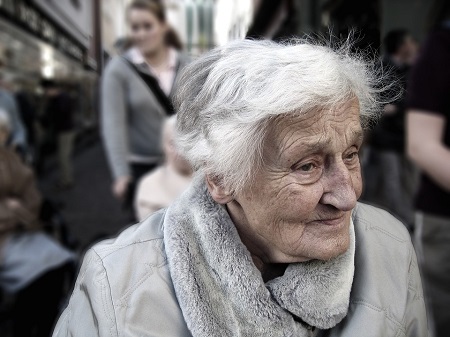 Additionally, folic acid has also been found to improve the memory of older people. There is some evidence that deficiency in folic acid may increase the risk of dementia, especially Alzheimer's disease and vascular dementia, but there is debate about whether it lowers risk of cognitive impairment in the older population. Folic acid supplementation is shown to lower blood homocysteine levels, while folic acid deficiency can lead to a condition of high levels of homocysteine (Hcy) in the bloodstream called hyperhomocysteinemia (HHcy). HHcy is related to several vascular diseases such as coronary artery disease, peripheral vascular disease, and stroke. Recently, HHcy was found to play a role in the development of Alzheimer's disease. In an experiment that gave one group of mice a folic acid deficient diet and the other group a diet treated with placebo, the folic acid deficient group developed higher blood Hcy levels as well as more beta amyloid (Aβ) peptides, the building blocks of Beta Amyloid plaques which are deposits found in the brains of those with Alzheimer's disease.

Dementia is a common form of age related cognitive decline. Dementia interferes with normal functioning operations, as well as a significant amount of memory loss. 25–29 million people over the world suffer from dementia. Alzheimer's disease is considered as the most common cause of dementia in people age 65 and older, estimated at 15–20% in this age group. The incidence and prevalence of Alzheimer's disease tends to increase exponentially with age, leading experts to suggest that the reported 5 million persons in the US (2010) would quadruple by year 2050, unless effective treatment is developed. One kind of Dementia is Vascular dementia, which has risk factor for strokes that are related to nutrition such has diabetes and obesity. Increased blood pressure can raise the risk for dementia. There have been several amino acid studies done on dementia. There is a significant less amount of tryptophan and methionine in people who have dementia. Another amino acid, homocysteine plays a role in the physiology of people with dementia. Antioxidants play a role in neutralizing free radicals, which put you at a higher risk for cancer as well as dementia.

The Alzheimer's Association estimates that 1 in 10 people over age 65 and nearly half of people over 85 have Alzheimer's disease. There is no clear identifying impairment pattern. It is identified by the presence of amyloid plaques and neurofibrallary tangles in the hippocampus. Some symptoms are forgetting, trouble with words and names, delusions and hallucinations. Moderate or mild malnutrition can cause an increased risk for Alzheimer's. About 4 million Americans a year are classified with Alzheimer's.