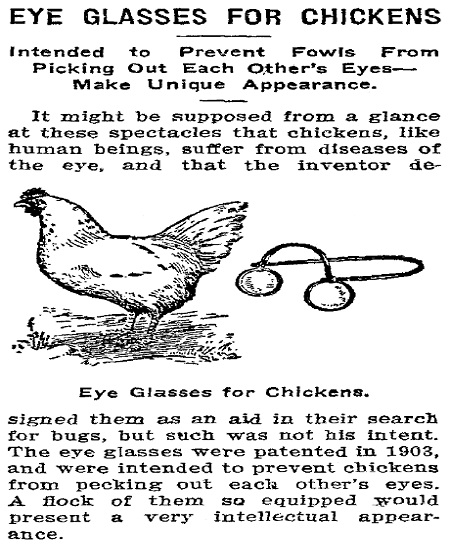 Chicken eyeglasses, also known as chickens specs, chicken goggles, generically as pick guards and under other names, were small eyeglasses made for chickens intended to prevent feather pecking and cannibalism. They differ from blinders as they allowed the bird to see forward whereas blinders do not. One variety used rose-colored lenses as the coloring was thought to prevent a chicken wearing them from recognizing blood on other chickens which may increase the tendency for abnormal injurious behavior. They were mass-produced and sold throughout the United States as early as the beginning of the 20th century.

Chicken eyeglasses were often made from celluloid or aluminum and typically consisted of "two oval panels that fit over the upper beak of the chicken. A pin is put through the nostril to-hold the oval pieces in place." Different designs were produced that attached to the chicken's head in different ways. Some were held in place by a strap, some by small hooks into the nares (nostrils) and some by piercing the bone septum between the nostrils with a cotter pin. Due to the piercing of tissue, this last type of design is illegal in some countries.

Some versions of the devices had lenses that were semi- or fully transparent whereas others were tinted, often red- or rose-colored. Other designs were blinders which are opaque and completely prevent forward vision. The intended purposes of chicken eyeglasses were to prevent aggressive pecking, cannibalism and feather pecking.

Chicken eyeglasses are an alternative to beak trimming, which is the removal of approximately one-third of the beak by a cold or heated blade, or an infrared beam, usually when chicks are 1-day old. This is often effective in reducing pecking injuries, but causes pain and has significant effects on chicken welfare.

Red-tinted lenses were considered to be effective in reducing internecine pecking because they disguise the color of blood. As summed up in a 1953 article in Indiana's National Road Traveler newspaper, "The deep rose-colored plastic lenses make it impossible for the cannibal [chicken] to see blood on the other chickens, although permitting it to see the grain on the ground."

Elmer Haas of the National Band & Tag Company, a major producer of rose-colored chicken eyeglasses, whose grandfather had "devised wire frames for chickens in 1902", indicated that he believed the purported blood-masking effect of the rose coloring was a myth: "the firm added the rose colored glasses because it indulged the chicken owners ... chickens are color blind". (In fact, chickens, like other birds, have good color vision.) The firm had added the rose-colored feature to its glasses in 1939 under the brand name "Anti-Pix". This variety of eyeglasses was more complicated than others because the red lenses were fixed to a hinge at the top of the frame. This meant that as the hen lowered its head to feed, the lens swung out giving the hen an unobstructed view of the ground. When the hen raised her head, as she would during aggression, the lens would swing down giving the hen a red tinted perception of the environment.

Rose-colored contact lenses, rather than eyeglasses, have also been proposed to reduce cannibalism in chickens.

A form of chicken eyeglasses was first patented in 1903 by Andrew Jackson, Jr. of Munich, Tennessee, as an "Eye-protector for chickens". In the U.S. they were available through the mail order company Sears-Roebuck, or through chicken feed stores for a few cents. The eyeglasses are no longer produced by the National Band & Tag Company, but are sought as collector's items.

Using chicken eyeglasses was still practiced in 1973, evident by a report in Illinois' The Hawk-Eye newspaper that a farmer had 8,000 chickens fitted with the rose-colored variety.[20] One inventor of a form of the glasses proposed legislation in Kansas to require all chickens in the state to be fitted with glasses, but his campaign was unsuccessful.

On January 16, 1955, Sam Nadler of the National Farm Equipment Company of Brooklyn appeared on CBS' popular primetime television show, What's My Line? The show was in the format of a guessing game, in which a panel attempted to determine the line (occupation) of contestants. Show officials listed Mr. Nadler's occupation for the audience as "sells 'eyeglasses' for chickens". After the panel was unsuccessful in guessing his occupation, Mr. Nadler's identity was revealed and he stated that his company sold 2–3 million pairs of chicken eyeglasses per year. What's My Line?'s director, Frank Heller said in 1958 that the show's "most unusual occupation" over its then eight-season run was "...the gentleman who makes eye glasses for chickens."