A forest kindergarten is a type of preschool education for children between the ages of three and six that is held almost exclusively outdoors. Whatever the weather, children are encouraged to play, explore and learn in a forest or natural environment. The adult supervision is meant to assist rather than lead. It is also known as Waldkindergarten (in German), outdoor nursery, nature kindergarten, or nature preschool. 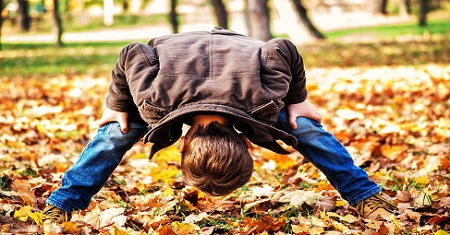 forest kindergarten can be described as a kindergarten "without a ceiling or walls". The daycare staff and children spend their time outdoors, typically in a forest. A distinctive feature of forest kindergartens is the emphasis on play with toys that are fashioned out of objects that can be found in nature, rather than commercial toys. Despite these differences, forest kindergartens are meant to fulfill the same basic purpose as other nurseries, namely, to care for, stimulate, and educate young children. Each forest kindergarten is different, partly because the organisations are independently minded. But typical activities and goals may include: Playing imaginative games using whatever resources and ideas come to mind; role play; building shelters or other large structures from branches, with the help of other children and adults; counting objects or looking for mathematical patterns; memory games using naturally available objects; listening to stories; singing songs and rhymes; arranging items to make a picture, or building a toy; drawing scenes; climbing trees and exploring the forest; playing hide-and-seek with others; walking to the woodland, from the building; exploring or reflecting alone; and resting.

Forest kindergartens operate mainly in woodland, although some other sites can be equally inspiring, for example beaches and meadows. There should be a building where children can shelter from extreme weather. They may also spend a small part of each day indoors, although that is more likely to be for administrative and organisational reasons, such as to provide a known location where parents can deliver and collect their children. If the woodland is too far away to walk, a vehicle might reluctantly be used for transport. Children are encouraged to dress for the weather, with waterproof clothes and warm layers, according to the climate.

There are some forest schools that take children of various ages to woodland less frequently, and with a stronger focus on environmental topics themselves. For example, the "Woods for Learning" strategy of the British Forestry Commission proposes "regular" access, for example once a week for eight weeks.

In rural areas, and historical times, access to nature has not been a problem. Over the last century, with increasing urbanisation and "nature deficit disorder", there have been many changes in stance on outdoor education. In 1914, the socialist political activists Rachel and Margaret McMillan set up an "open-air nursery" but little is known of the details, except for an improvement in child health. 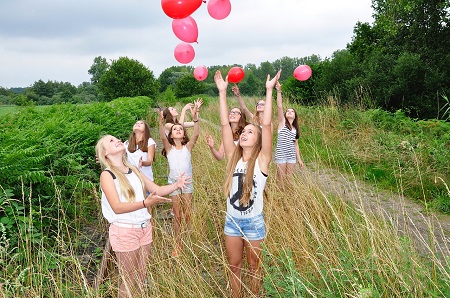 In Sweden in 1957, an ex-military man, Goesta Frohm, created the idea of "Skogsmulle". "Skog" means wood in Swedish. "Mulle" is one of four fictional characters he created to teach children about nature, along with "Laxe" representing water, "Fjällfina" representing mountains and "Nova" representing an unpolluted nature. Forest schools based on Frohm's model, called "I Ur och Skur" (Rain or Shine Schools) moved the idea from occasional activities to formal nursery schools, being set up by Siw Linde in 1985. Juliet Robertson's review of Skogsmulle is a valuable modern-day summary.

Also in the 1950s, Ella Flautau created forest kindergartens in Denmark. The idea formed gradually as a result of her often spending time with her own and neighbors' children in a nearby forest, a form of daycare which elicited great interest among the neighborhood parents. The parents formed a group and created an initiative to establish the first forest kindergarten.

In Britain in 2005, a Swedish early years educator, Helena Nilsson, started Wildflowers Kindergarten, where preschool-aged children spend each morning in nature, throughout the year.

Childminder Cathy Bache opened the Secret Garden in Scotland in 2008 with support from funding authorities and private donors.

In 1996, the first forest kindergarten (as far as is known) was founded in North America. Tender Tracks, in the Bay Area of California was founded by Wendolyn Bird, and is still in operation.

The fact that most forest kindergartens do not provide commercial toys that have a predefined meaning or purpose supports the development of language skills, as children verbally create a common understanding of the objects used as toys in the context of their play. Forest kindergartens are also generally less noisy than closed rooms, and noise has been shown to be a factor in the stress level of children and daycare professionals.

Merely keeping sight of natural features improves self-discipline in inner-city girls. Visiting a forest school regularly is desirable for schools although still not widespread; some aim to spend one day a week out. 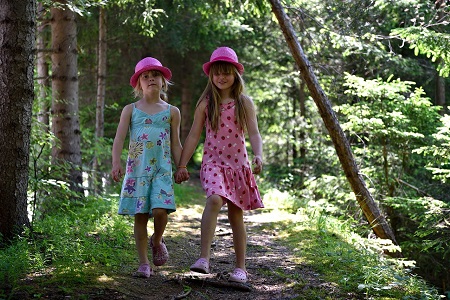 outside for prolonged periods has been shown to have a positive impact on children's development, particularly in the areas of balance and agility, but also manual dexterity, physical coordination, tactile sensitivity, and depth perception. According to these studies, children who attend forest kindergartens experience fewer injuries due to accidents and are less likely to injure themselves in a fall. A child's ability to assess risks improves, for example in handling fire and dangerous tools. Other studies have shown that spending time in nature improves attention and medical prognosis in women (see Attention Restoration Theory). Playing outdoors is said to strengthen the immune systems of children and daycare professionals.

When children from German Waldkindergartens go to primary school teachers observe a significant improvement in reading, writing, mathematics, social interactions and many other areas. Boys may be less intellectually able than girls at typical school tasks such as reading and mathematics, so forest kindergartens have been recommended in the early years.

Helicopter parenting is becoming more clearly recognised in the culture of fear of today's risk averse society. While some parents rush to 'wrap their children in cotton wool', others see outdoor play and forest kindergartens as a way to develop a mature and healthy outlook on life, as well as practical skills and health. Doing this at a young age is hoped to bring lifelong benefits to the child. It is consistent with the notions of slow parenting, the "idle parent" and "free range kids".