In the Gregorian calendar, New Year's Eve (also known as Old Year's Day or Saint Sylvester's Day in many countries), the last day of the year, is on December 31 which is six days after Christmas. Samoa and parts of Kiribati are the first places to welcome the New Year while American Samoa and Baker Island in the United States, are among the last. 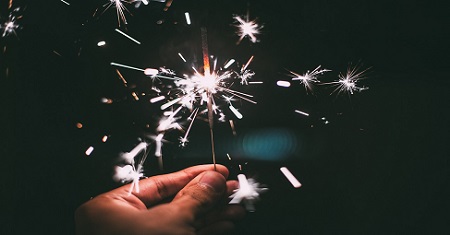 Year traditions and celebrations in Canada vary regionally. New Year's Eve (also called New Year's Eve Day or Veille du Jour de l'An in French) is generally a social holiday. In many cities, such as Toronto and Niagara Falls in Ontario, Edmonton and Calgary in Alberta, Vancouver, British Columbia and Montreal, Quebec, there are large celebrations which may feature concerts, late-night partying, sporting events, and fireworks, with free public transit service during peak party times in most major cities. In some areas, such as in rural Quebec, people ice fish in the old days. Since 2000, the highlight of New Year's Eve celebrations is in Montreal's old port, which comes alive with concerts that take place and fireworks at midnight.

From 1956 to 1976, Guy Lombardo and his Royal Canadians serenaded Canada on the CBC, via a feed from CBS, from the ballroom of the Waldorf-Astoria Hotel on Park Avenue in New York City. After Lombardo's death in 1977, the Royal Canadians continued on CBC and CBS until 1978.

In 1992, the sketch comedy troupe Royal Canadian Air Farce began airing its annual Year of the Farce special on CBC Television, which features sketches lampooning the major events and news stories of the year. While the original 1992 edition was a one-off special, Year of the Farce episodes continued as a regular feature of the Air Farce television series which ran from 1993 to 2008—airing its series finale on December 31, 2008. Following the finale of the television series, the original cast continued to participate in New Year's Eve specials in the years following.

Similarly, the CBC's French language network Ici Radio-Canada Télé airs its own yearly New Year's Eve comedy special, Bye Bye. Unlike Year of the Farce, Bye Bye has been presented by various comedians; originally running from 1968 to 1998, it was revived in 2006 by the Québécois troupe Rock et Belles Oreilles. Its 2008 edition, hosted and co-produced by Québécois television personality Véronique Cloutier, became infamous for several sketches that many viewers perceived as offensive, including sketches making fun of English Canadians and then American president-elect Barack Obama. 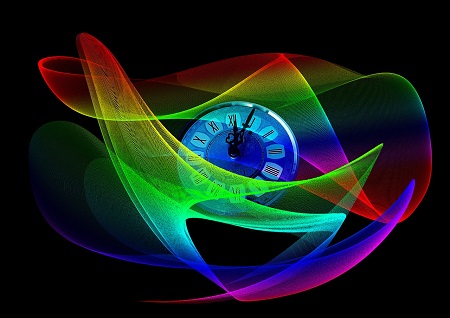 Mexicans celebrate New Year's Eve, (Spanish: Vispera de Año Nuevo) by eating a grape with each of the twelve chimes of a clock's bell during the midnight countdown, while making a wish with each one. Mexican families decorate homes and parties in colors that represent wishes for the upcoming year: red encourages an overall improvement of lifestyle and love, yellow encourages blessings of improved employment conditions, green for improved financial circumstances, and white for improved health. Mexican sweet bread is baked with a coin or charm hidden in the dough. When the bread is served, the recipient of the slice with the coin or charm is said to be blessed with good luck in the New Year. Another tradition is to make a list of all the bad or unhappy events over the past 12 months; before midnight, this list is thrown into a fire, symbolizing the removal of negative energy from the new year. At the same time, they are expressed for all the good things during the year that is ending so that they will continue in the new year.

Mexicans celebrate with a late-night dinner with their families, the traditional meal being turkey or pork loin. Afterwards many people attend parties outside the home, for example, in night clubs. In Mexico City there is a street festival on New Year's Eve centered on the Zocalo, the city's main square. Celebrations include firecrackers, fireworks and sparklers and shouts of "¡Feliz Año Nuevo!"

In the United States, New Year's Eve is celebrated with formal parties, family-oriented activities, and other large public events.

One of the most prominent celebrations in the country is the "ball drop" held in New York City's Times Square. Inspired by the time balls that were formally used as a time signal, at 11:59 p.m. ET, an 11,875-pound (5,386 kg), 12-foot (3.7 m) diameter Waterford crystal ball located on the roof of One Times Square is lowered down a pole that is 70 feet high, reaching the roof of the building 60 seconds later to signal the start of the New Year. The Ball Drop has been held since 1907, and in recent years has averaged around a million spectators annually. The popularity of the spectacle also inspired similar "drop" events outside of New York City, which often use objects that represent a region's culture, geography, or history—such as Atlanta's "Peach Drop", representing Georgia's identity as the "Peach State". Alongside the festivities in Times Square, New York's Central Park hosts a "Midnight Run" event organized by the New York Road Runners, which culminates in a fireworks show and a race around the park that begins at midnight. 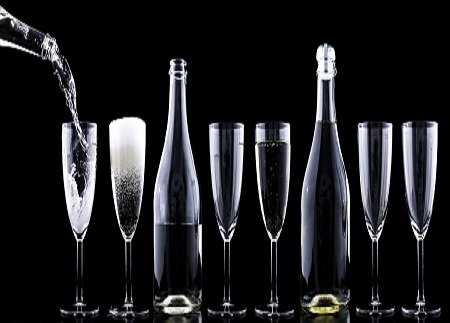 and television broadcasts from festivities in New York helped to ingrain aspects of them in American pop culture; beginning on the radio in 1928, and on CBS television from 1956 to 1976 with ball drop coverage, Guy Lombardo and his band, The Royal Canadians, presented an annual New Year's Eve broadcast from the ballroom of New York's Waldorf-Astoria Hotel. The broadcasts were best known for the Royal Canadians' signature performance of "Auld Lang Syne" at midnight, which made the standard synonymous with New Year's in the United States. Following Lombardo's death in 1977, ABC's competing program New Year's Rockin' Eve succeeded the Royal Canadians as the dominant New Year's Eve special on U.S. television. Its creator and host Dick Clark intended the program to be a modern and youthful alternative to Lombardo's big band music. Including ABC's special coverage of the year 2000, Clark would host New Year's Eve coverage on ABC for 33 straight years. After suffering a stroke, Clark ceded hosting duties in 2005 to talk show host Regis Philbin, and retired as full-time host in 2006 in favor of Ryan Seacrest due to a speech impediment caused by the stroke. Clark continued to make appearances from a studio on the program annually until his death in 2012.

Notable celebrations occur in other U.S. cities as well. On the Las Vegas Strip, the streets are closed to vehicle traffic on the evening of New Year's Eve, and a large fireworks show is held at midnight which spans across multiple resort buildings. Major theme parks may also hold New Year's celebrations; Disney theme parks, such as Walt Disney World Resort in Florida and Disneyland in Anaheim, California, are traditionally the busiest during the days up to and including New Year's Eve. Los Angeles, a city long without a major public New Year celebration, held an inaugural gathering in Downtown's newly completed Grand Park to celebrate the beginning of 2014. The event included food trucks, art installations, and light shows, culminating with a projection mapping show on the side of Los Angeles City Hall near midnight. The inaugural event drew over 25,000 spectators and participants. In 2015, Chicago held Chi-Town Rising, the city's first ever outdoor New Year's Eve festival on the Magnificent Mile. The event was hosted by Mario Lopez with musical guests American Authors and Chicago. Nearly 100,000 people attended the inaugural event. 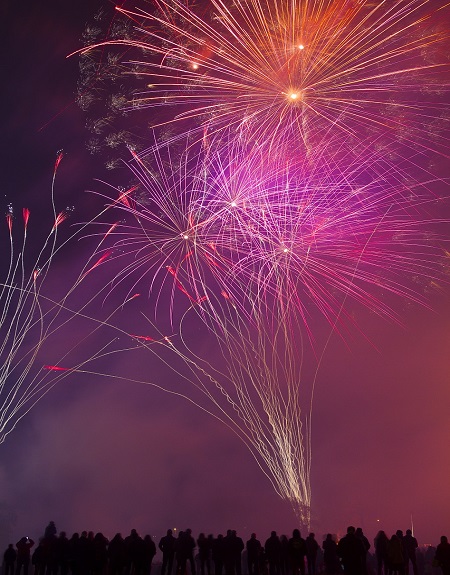 In the Roman Catholic Church, January 1 is a solemnity honoring the Blessed Virgin Mary, the Mother of Jesus; it is a Holy Day of Obligation in most countries (Australia being a notable exception), thus the Church requires the attendance of all Catholics in such countries for Mass that day. However a vigil Mass may be held on the evening before a Holy Day; thus it has become customary to celebrate Mass on the evening of New Year's Eve. (New Year's Eve is a feast day honoring Pope Sylvester I in the Roman Catholic calendar, but it is not widely recognized in the United States.)

Many Christian congregations have New Year's Eve watchnight services. Some, especially Lutherans and Methodists and those in the African American community, have a tradition known as "Watch Night", in which the faithful congregate in services continuing past midnight, giving thanks for the blessings of the outgoing year and praying for divine favor during the upcoming year. In the English-speaking world, Watch Night can be traced back to John Wesley, the founder of Methodism, who learned the custom from the Moravian Brethren who came to England in the 1730s. Moravian congregations still observe the Watch Night service on New Year's Eve. Watch Night took on special significance to African Americans on New Year's Eve 1862, as slaves anticipated the arrival of January 1, 1863, when Lincoln had announced he would sign the Emancipation Proclamation.